In my job, I see a lot of academic reports about the decline of newspapers. Many of the reports look at the situation across the United States, or in rural America. A few look at similar problems in Europe and Australia. Internet advertising and social media have emaciated the traditional news industry in every free country around the world.

Now the League of Women Voters of Washington is out with their own version focused on media in the Evergreen State. I don’t mean to give away their conclusion, but the title is “The Decline of Local News and Its Impact on Democracy.”

“The newspaper in your hands is a shadow of its former self,” it begins. “Local newspapers — the vehicle millions have relied on for information for important, even critical, life decisions for decades — are in crisis.”

The study finds that Washington has lost more than two dozen weeklies and three dailies since 2004, which is about 20 percent of its newspapers. That’s slightly better than the 25 percent lost nationwide.

But in the newspapers that remain, coverage has shrunk. The report discusses The News Tribune in Tacoma, which has been bought and sold several times and is now controlled by a hedge fund, Chatham Asset Management. The TNT used to have more than 130 newsroom employees, but now has about 25, according to the report. (The Columbian newsroom currently has about 30 employees, about half what we had in the good old days.)

With fewer journalists, Washington newspapers are producing less news. I looked at the Tribune’s Nov. 15 edition — it contained only 16 pages, and I saw only two local news stories, plus a police brief. There was also a sports column from a local sports talk radio personality about professional football. I didn’t see an editorial page or any local photos.

The League’s report goes on to detail why this is a problem: “How do people know, for instance, about inappropriate behavior by those in power? Or about a lack of adherence to regulations? Or about construction projects where corners have been cut? How do people know where to locate the latest vaccine to combat a public health crisis or for support for children whose lives have become chaotic because of a pandemic?

“National studies link a drop in voter participation to the newspaper decline. Original research by the news study committee found a similar outcome for Washington. The decline also has meant less community engagement and greater political partisanship. Observers lament the loss of the souls of communities and the glue that holds communities together.”

We should all thank Clark County participants in the League’s study. Dee Anne Finken, retired Clark College journalism faculty member, was the co-chair, and Sally Carpenter Hale was on the study committee. Judie Stanton was on the reading committee.

Because the League is focused on democracy and the public good, and not the news industry, the report does not try to prescribe any solutions. The League hopes to use the report to foster discussion about the importance of robust local news and to formulate a policy position for the group. 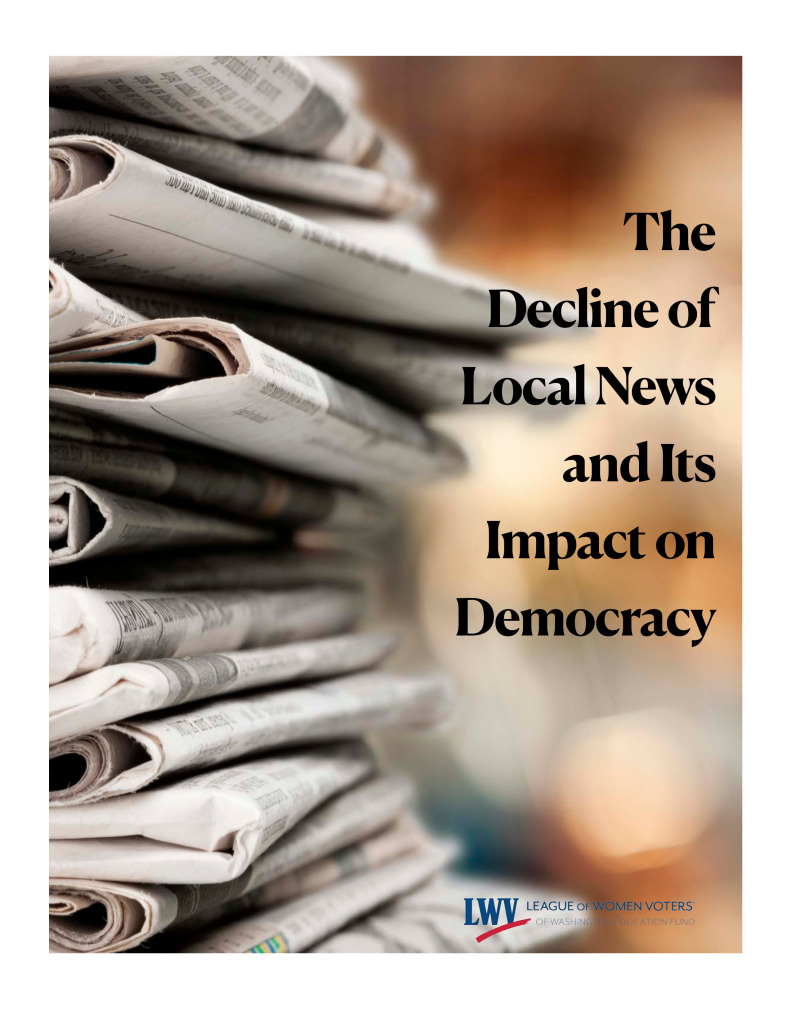 But there are a few positives that hint at a future for our industry. The report includes interviews with Ben Campbell and Will Campbell, fourth-generation owners of The Columbian, and talks about our successful effort to raise money from local philanthropists and readers to directly fund new reporting positions. This year, we’ve hired our first three community-funded journalists, and we hope to expand the program soon.

Although the prognosis for local media is still guarded, I think we’ll find our footing at The Columbian and be around to pester politicians, bureaucrats and crooks for many years.