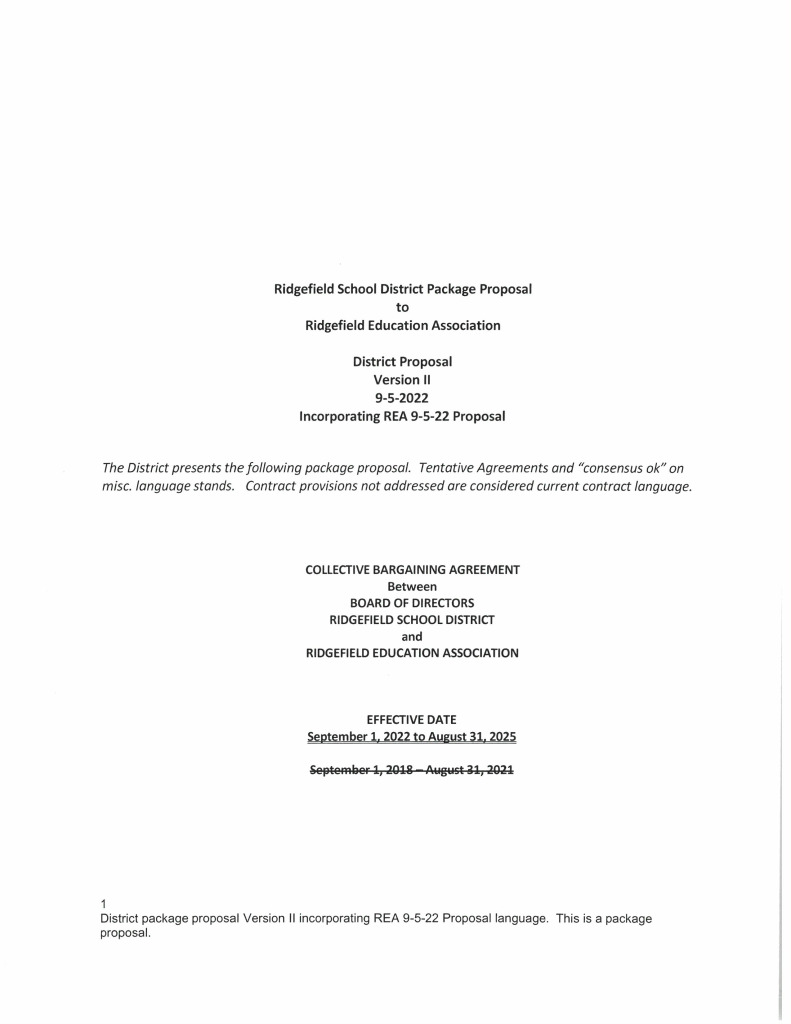 The union membership voted Aug. 29 with 92 percent approval to authorize a strike if the executive board felt it was necessary in the coming days. Based on the state of negotiations before Wednesday afternoon, union representatives said they felt there was still significant distance between the two sides.

“We love teaching in Ridgefield and we love our students, but we’ve experienced too much burnout and seen unsustainable practices that don’t give our students the support and resources they need,” REA Co-President Elizabeth Stamp said in a release on Wednesday night. “We want to stop turnover in Ridgefield and our district has the resources to make a difference, we just need a contract that makes that a priority.”

On Monday, the Ridgefield School District extended an updated contract offer — which can be found on the district’s bargaining update page — after two days of impromptu negotiations on Sunday and Monday.

“In the last four years, we’ve lost literally half of our special education staffers to other districts,” said Joe Thayer, a sixth grade teacher in the district and former president of the union. “(The Ridgefield School District) tell us we don’t have the resources, we don’t have the staff. We’re putting too many students with too great of needs for our individual staffers.”

Additional specifics on that section can be found starting on page 46 of the district’s most recent contract offer.

In its Aug. 29 offer, the district extended the full 5.5 percent cost-of-living adjustment allocation provided by the state — a salary boost that had previously been among the union’s top priorities, referencing how the money had been handed down to teachers in other districts in the area without the need for bargaining. However, union members say they are seeking language that protects future state funds intended for teachers so that they need not reopen the contract and bargain again next summer.

“We want to guarantee in writing that in the future we don’t have to keep fighting for this,” Thayer said. “I think that could prevent a lot of conflict in the future.”

Other top priorities for the union include increased time allowed for preparation and planning and fewer responsibilities in supervising students outside of instructional time, such as before and after school.

“The district is asking (teachers) to do more and more things that aren’t teaching,” Thayer said. “I come in an hour early every day to help watch these students.”

Members of the union, which represents about 200 certificated teachers and staff throughout the district, have been working without a contract since Sept. 1, which was the second day of the school year.

“We like working with our students way more than we like walking around carrying signs,” Thayer said. “But I have not seen the urgency from the district that I would personally like to see and that I think is necessary.”