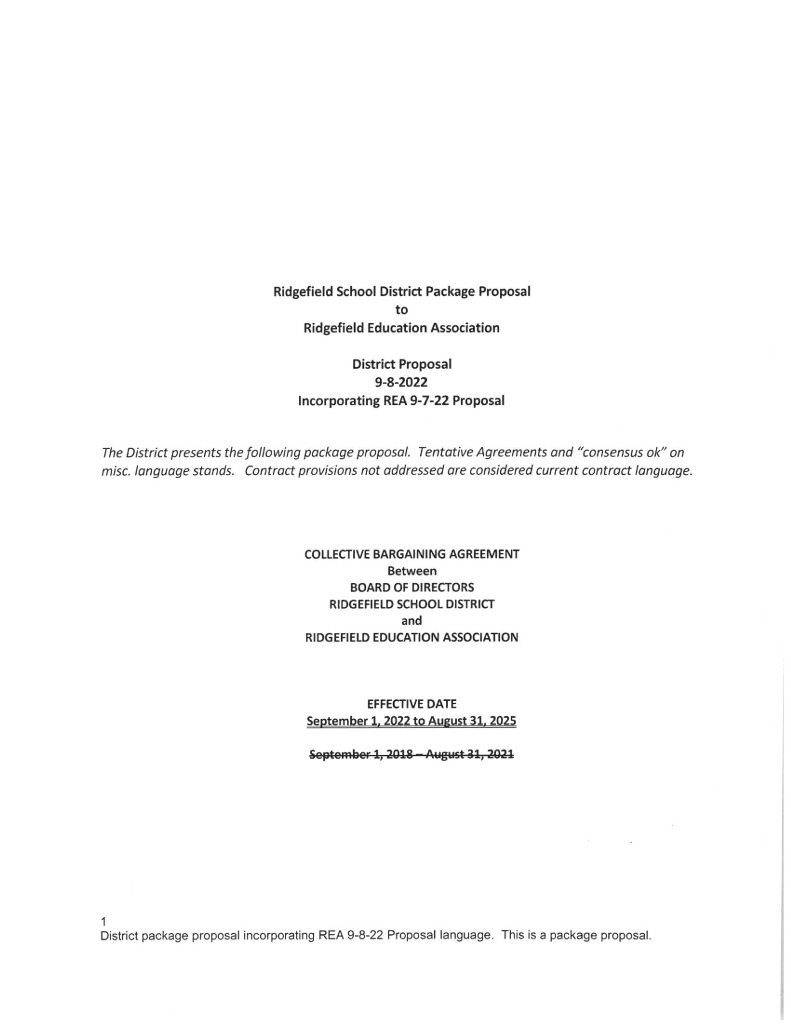 Joe Thayer, a former president of the union, spoke before a group of a few dozen picketers and union members outside of Sunset Ridge Intermediate School just before 8 a.m.

Each dressed in red, union members planned to walk the picket line outside schools across the district throughout the day as leaders met with the Ridgefield School District’s bargaining team to reach a deal that would prevent the strike’s continuation.

“We were both happy to keep meeting all night (on Thursday), but we weren’t pushing forward on the measures we cared most about,” Thayer said to the crowd. “It had been a long week of work for our teachers. Sitting in a room for four more hours isn’t in anyone’s best interest.”

Thursday night’s negotiations wrapped up around 8:40 p.m., and the district announced school closures shortly after. News of the strike and school closures on Thursday night sent waves across social media, with nearly 300 comments on the district’s Facebook post as of Wednesday afternoon. Comments seemed to show broad support for the teachers union, with many users having changed their profile pictures to a red banner reading “I support Ridgefield teachers.”

Union leaders and district representatives bargained from 10 a.m. to around 3:30 p.m. Friday. District spokesperson Joe Vajgrt said the two sides have plans to meet again from 11:30 a.m. to 4:30 p.m. today and, if necessary, from noon to 7 p.m. Sunday.

“I just don’t know why we’re having to fight for this,” said Donna Allen, a middle school teacher. “I don’t do this job for money. I’m here for students, and that’s all it is.”

During the strike, school buildings and offices will be closed and meal services will be suspended. Middle and high school athletics, however, will continue as scheduled. Students who attend Cascadia Tech Academy will attend their classes as scheduled, and will be able to take the bus to and from school at their usual location.

The union — which represents an estimated 200 certificated staff members in the district, namely classroom teachers — has been negotiating with the district throughout the summer. Union members have been working without a contract since Sept. 1 — the second day of the school year.

Top priorities for the union are guarantees that teachers would receive a 5.5 percent cost of living adjustment allocation — effectively a state-funded salary boost intended for teachers — as well as reductions in special education class sizes and caseloads. Though the past week of negotiations reportedly made substantial progress toward a deal, the union said Thursday night that they still felt the district wasn’t doing enough to meet their requests.

“While progress has been made toward an agreement, the RSD team has refused to use its available funding to provide more mental health supports, improvements for special education students and a better program for student interventions,” union spokesperson Adam Isaguirre said in a Thursday night press release. “District leaders can’t just talk about making these a priority; solutions must be in writing in our contract.”

Many teachers picketing on Friday recalled the last time the union was on strike in 2018, only they found this time to be more shocking.

“This one is surreal,” said Dam Nguyen, a middle school teacher in his 13th year with the district. “After the last three years of struggles on our end and with students, I think we were all hoping to come back fresh. We didn’t think this was going to happen.”

The combination of the unprecedented challenges wrought on education by COVID-19 pandemic and rapid population growth in the district, teachers said, has left the state of special education and mental health support in disarray. That issue isn’t something that’s unique to Ridgefield, either.

“We’re trying to provide individualized support for those students with more advanced needs,” said Monica Deshazier, a counselor at Ridgefield High School who’s been with the district for 16 years. “These teachers are the go-between for students, families and their teachers. They’re in a critical position. If we can make class sizes and case loads smaller, they’ll be able to provide better, more individualized care and education. It helps everyone.”

With fewer paraeducators and frequent turnover in special educators, she said, additional pressure has been put on classroom teachers to provide social-emotional support. In some cases, they feel it’s not something they’re prepared to provide.

“We have seen an increase in students with thoughts of suicide, with thoughts of hurting themselves. Students are still figuring out how to reintegrate themselves socially,” Deshazier said. “That’s what’s really hard. It feels like something is broken.”

A concerted effort to hire additional paraeducators, they said, would be a positive solution to lower class sizes and caseloads for special educators, allowing classroom teachers to focus on instructional duties and special educators to provide more one-on-one support for students who need it most.

Another way to work toward a deal more quickly, they said, would be to include members of the Ridgefield Board of Directors in on the bargaining sessions.

“The problem today is that we aren’t bargaining with the school board,” said Joe Thayer in his morning address to picketers. “There’s too many ways for the impact of our message to fall through. In 2018, board president Joe Vance was in the meetings and we were able to reach a deal.”

Bargaining in the coming days

The union had previously authorized a strike if a deal couldn’t be reached in a membership meeting on Aug. 29, with 92 percent approval.

The Ridgefield School District said in a statement Thursday night that they’d continue to work with the union to reach a deal to prevent further closures.

“Despite making progress, we unfortunately did not come to an agreement on the terms of a new contract with the teachers’ union and have been informed that they will be going on strike tomorrow,” the district said in a statement posted on Twitter late Friday. A spokesman had said earlier that the district would cancel classes if teachers went out on strike.

Ridgefield’s strike isn’t the only one in Washington that’s making waves: teachers in Seattle Public Schools — with 109 schools and more than 50,000 students — began a strike Wednesday after the union was unable to reach a new contract deal with the school district.

In Clark County, Washougal Association of Educators members began the 2022-23 school year without a contract after failing to reach an agreement with the Washougal School District by the first day of school.