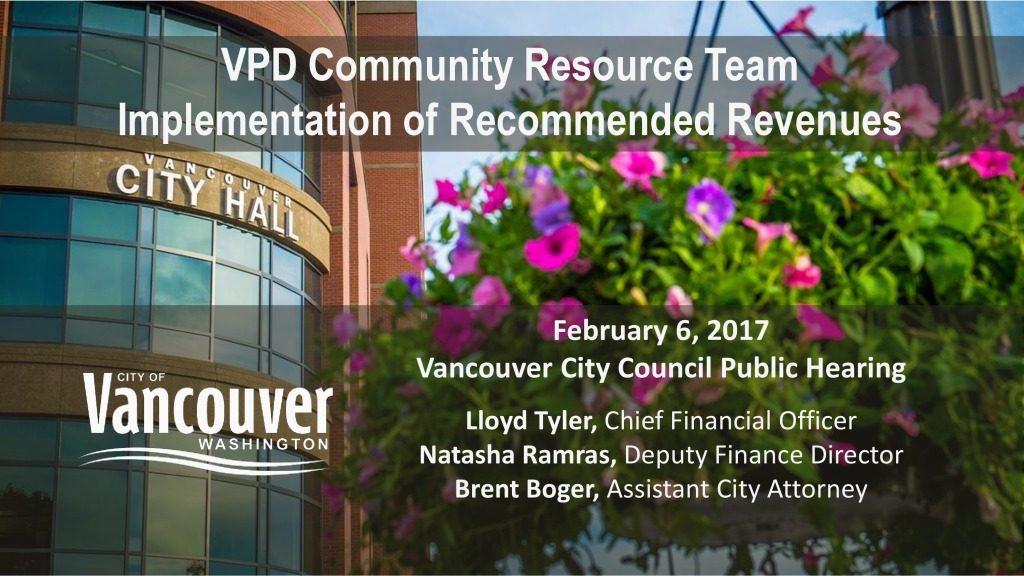 The Vancouver City Council has approved a package of tax and fee hikes to increase funding for the city’s police department, a move that will add 61 positions to the department by 2020.

The money will allow the police department to fill gaps that were created during the recession when cuts were made.

The increases approved Monday were recommended by a group of community members, business organizations and neighborhood groups that convened in spring 2016 to tackle how to increase funding and personnel and resource demands. The recommendation from the Community Resource Team will tap both new and existing fund sources to generate $5.1 million in 2017 and increase to $12.5 million by 2020, according to information from the council.

“We will focus these new resources on programs that Vancouver citizens have indicated were important to them, such as our traffic unit, property crimes unit and community outreach programs. We will also add more patrol officers, intelligence officers and drug and gang task force officers, in addition to civilian technicians and other support staff,” Vancouver Police Chief James McElvain said in a statement.

The Vancouver Police Department has 23 fewer staff members than it did before 2009. Since that time, the city’s population has grown to about 173,000 residents. Calls to 911 increased by about 10 percent in the first two quarters in 2016, compared to the same time frame in 2013, according to information from the city.

Starting in 2017, the package includes a business license surcharge rate increase of $20 per FTE and a 3.4-percent utility tax increase. Out of the estimated $12.4 million increase phased in by 2020, $2.1 million would come from the marijuana sales tax, $2.3 from the multifamily surcharge and $3.4 million from the utility tax.

Vancouver Police Department’s current annual budget is $38.6 million, about 27 percent of the city’s total general fund budget. The city spends an additional $10.4 million on other law-enforcement services, such as jail services. Under the latest plan, an additional $12.4 million would need to be generated annually by the year 2020, according to city information.