After nearly nine years of analysis, the Bonneville Power Administration has decided to not build the costly and controversial high-voltage transmission line known as the I-5 Corridor Reinforcement Project.

The 79-mile-long, 500-kilovolt transmission line would have run from Castle Rock to Troutdale, Ore. It was projected to cost around $722 million and would have been the first major transmission constructed west of the Cascades in about 40 years.

Elliot Mainzer, BPA’s administrator and CEO, said he decided to not build the project after examining its size, rising costs and its local impacts after the release of the project’s final impact statement in February 2016.

Those examinations, in turn, prompted BPA to look more carefully at how it operates its transmission systems and how it forecasts electrical demand, power generation and changes in the market.

As a result, BPA plans to take a more flexible approach to its operations. Now the agency is confident it can meet the region’s power needs without building the line.

“My decision today reflects a shift for BPA — from the traditional approach of primarily relying on new construction to meet changing transmission needs, to embracing a more flexible, scalable, and economically and operationally efficient approach to managing our transmission system,” Mainzer wrote in a letter addressed to “parties interested in the I-5 Corridor Reinforcement Project.”

In an interview with The Columbian, Mainzer said congestion is still a problem along the north-south corridor. However, the agency will address congestion with a suite of tools, including a less conservative and more “risk informed” approach in its capacity calculations, the development of new tools to monitor the grid in real time, collaboration with other regional utilities, and will look to nonwire solutions such as battery storage and electrical flow control devices.

“Traditionally, the solution to a problem like this is, ‘Let’s go build a line’ — and lines are great — they provide a lot of certainty and capacity,” he said. “But the question was not necessarily what transmission line we have to build, but how do we have to solve the transmission problem.”

Mainzer said the death of the project doesn’t mean an end to transmission-line construction in the Pacific Northwest. But in the future, the agency plans to look at finding more efficient ways to move power and to build at the smallest possible scale.

While the BPA invested nine years into studying the project, Mainzer said the agency is still calculating how much money it invested in the project. 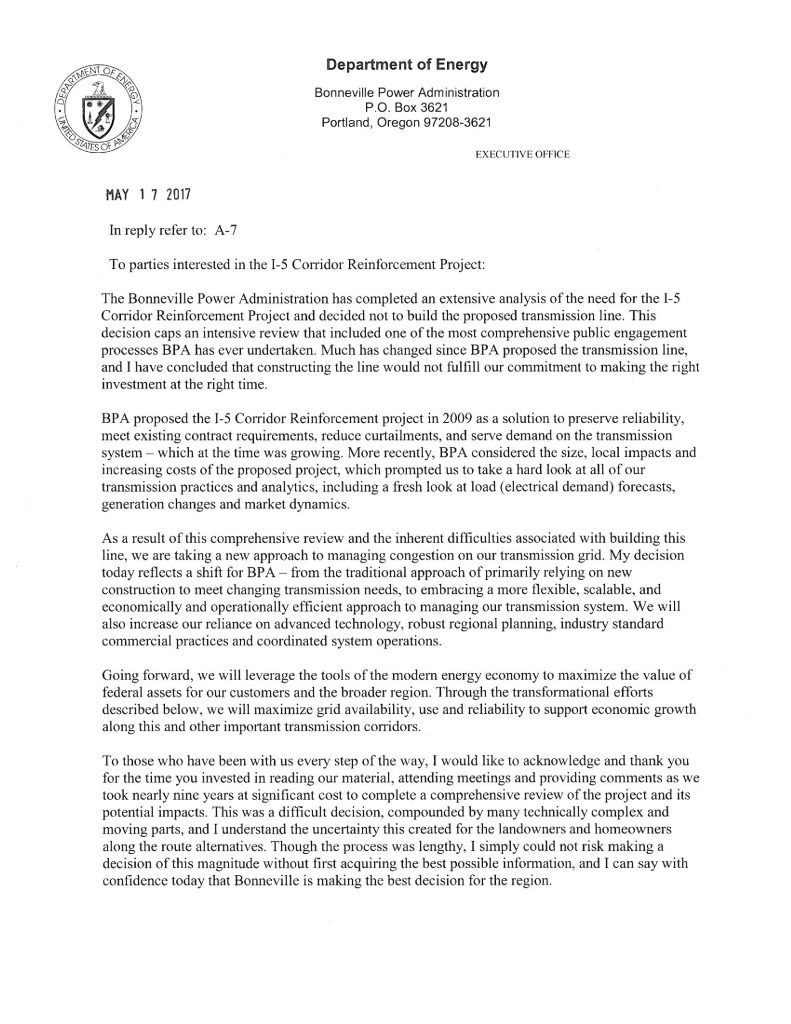 “We’re in the process of calculating the final amount but it was a significant sum,” he said, noting that it’s now pursuing alternatives that are less expensive than building the transmission line.

When the I-5 Corridor Reinforcement Project was first proposed, BPA officials saw the line as necessary for meeting the electrical demands of the rampant population growth between the Portland and Seattle metro areas. But because the transmission system feeds customers along the entire West Coast, the new line would benefit customers in the Southwestern United States.

Project designers considered several paths for the line, but in 2012 identified the preferred “Central Alternative.”

It would have started at Castle Rock and run about 7 miles east of I-5 before veering east and crossing the Clark-Cowlitz county line near Merwin Dam. It would have then run between Camas and Washougal before crossing the Columbia River and ending at Troutdale.

The project was highly controversial with property owners along the proposed route. Many of those who lived in the proposed path worried about the line’s potential impacts on their property values and their health. Some formed citizen groups that rallied against the project and advocated for alternative solutions.

The cities of Camas and Washougal were also critical of the new larger transmission lines and urged BPA to consider other alternatives.

BPA officials at the time said they reviewed more than 10,000 comments submitted on the project’s draft environmental impact statement.

Mainzer said he understands the uncertainty the project created for some area land and homeowners and that he’s thankful for the time, energy and patience they also put into the decision-making process.

“I simply could not risk making a decision of this magnitude without first acquiring the best possible information, and I can say with confidence today that Bonneville is making the best decision for the region.”

In a statement released by the BPA, Rep. Jaime Herrera Beutler, R-Camas, said she commended the agency for working with landowners, community groups and municipalities.

“Frankly, BPA’s willingness to reverse course on the planned 500-kilovolt lattice-steel-tower transmission line that would have bisected our communities is somewhat unprecedented,” she said. “It should serve as a model for other public entities who need to be willing to constantly reassess their decisions to make sure the community is at the center of them.”