Quinn filed a tort claim and whistleblower complaint with similar allegations against the city Sept. 20. Quinn cites her complaint in the suit and states the city failed to address her claims — an ongoing trend of neglect within the city, she said.

The suit claims Holmes, Potter and Young engaged in a pattern of disparate treatment toward female employees that created a hostile work environment, culture of discrimination and retaliation for complaining about the environment.

“Gender discrimination and these kinds of issues are very serious topics as we can see now in the news,” said Shelley Russell, Quinn’s attorney. “This is a situation where she went through the administrative channels, (and) we don’t feel it’s been sufficiently addressed. So she’s exercising her right to take the next step.”

The suit alleges that since Potter was hired in 2013, he has intentionally created a discriminatory and hostile work environment for women, minorities and women more than 40 years old. These actions include an incident in December 2013 when Potter referred to a female staff member as “the one with the big tits.” In October, Potter told The Columbian he made the statement but denied further allegations of derogatory comments.

“I regret it; have apologized for it; and have learned from the experience,” Potter said previously. “It was an isolated incident in a public career that spans over 25 years. It was not representative of what (I) expect from myself or others.”

The suit states Potter received a corrective counseling memorandum for his conduct in September 2016.

Quinn also details alleged retaliation that stems from her 2014 application for chief assistant city attorney. Quinn alleges she was the preferred candidate for the position by a panel of staff from the city attorney’s office, but not of a second panel consisting of male management staff. Quinn alleges Potter made sexist and derogatory remarks to the male panel about Quinn to discourage her selection. Young was selected for the position although he did not apply or interview for the job, she states. Quinn alleges that Potter selected Young because he wanted Young to succeed him as city attorney.

In November 2015, Quinn was put on administrative leave minutes before she was scheduled for an interview to discuss claims of gender and other discrimination with an investigator looking into allegations made by former assistant city attorney Suzanne Lampkin. Quinn states she was placed on leave without informing her of the cause. She was on leave for four months and received no reprimand upon return to work. While on leave, the city settled Lampkin’s claim for $100,000 and a second complaint made by former city procurement specialist Kimberly Armstrong for $150,000.

“When I was returned to work, some of my work had been taken away, my merit pay increase was delayed and I felt retaliated against and complained of being retaliated against three separate times,” Quinn said in her whistleblower claim.

While on leave in 2015, Quinn filed an initial discrimination, retaliation and hostile work environment complaint with the city’s Human Resources Department. An outside investigator was hired to conduct the investigation, but the investigation was put on hold for several months, the suit states. When the investigation resumed in April 2016, Quinn states some of her allegations were sustained but the findings were not placed in Potter’s or Young’s personnel files or sent to the HR office.

Quinn further alleges that the ongoing hostile work environment and culture of discrimination has caused her to lose sleep and weight, vomit and suffer anxiety for which she’s sought medical treatment.

Holmes did not return requests for comment by press time. Potter dismissed the claims for the second time.

“The outside law firm that investigated the complaint found that there was no discrimination,” Potter said via email. “The federal Equal Employment Opportunity Commission dismissed the complaint. I fully expect the same result with the lawsuit.”

Young also said the claims are unfounded and that the city has “agreed to defend me from these claims.” 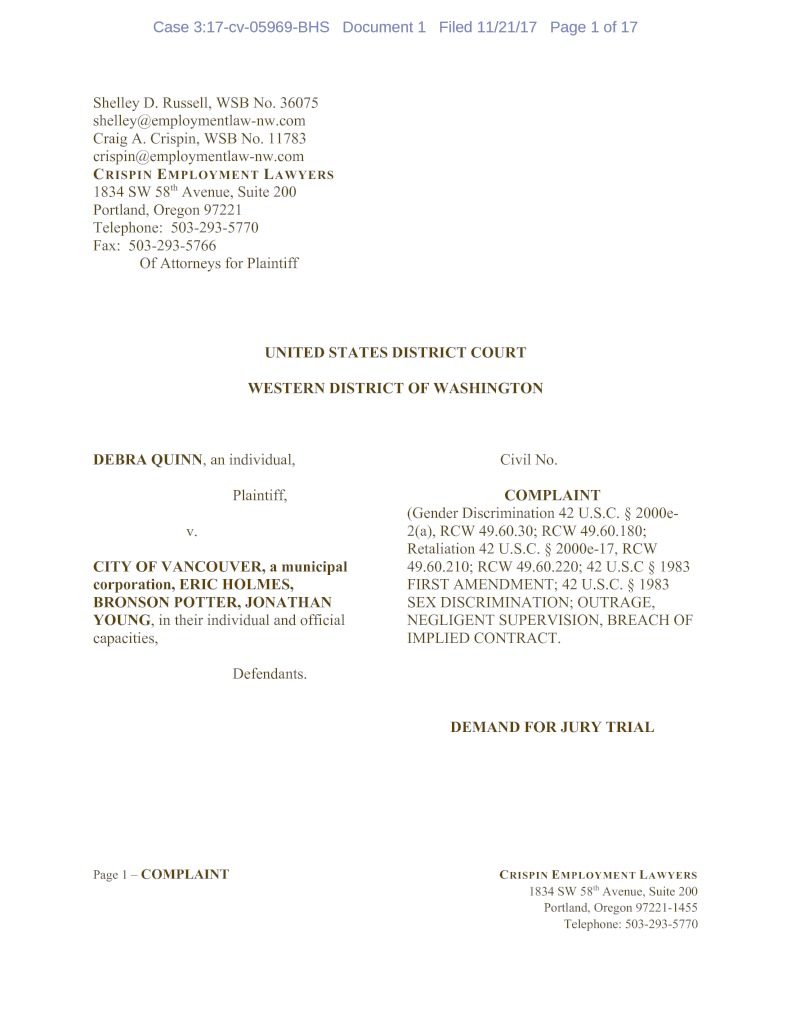 “As for Ms. Quinn’s claims against me, with $400 and a piece of paper you can start a lawsuit against anyone you wish,” Young said via email. “The fact that a lawsuit has been filed doesn’t mean it has merit.”

He added that “this is a tough time but we’ll work through it.”