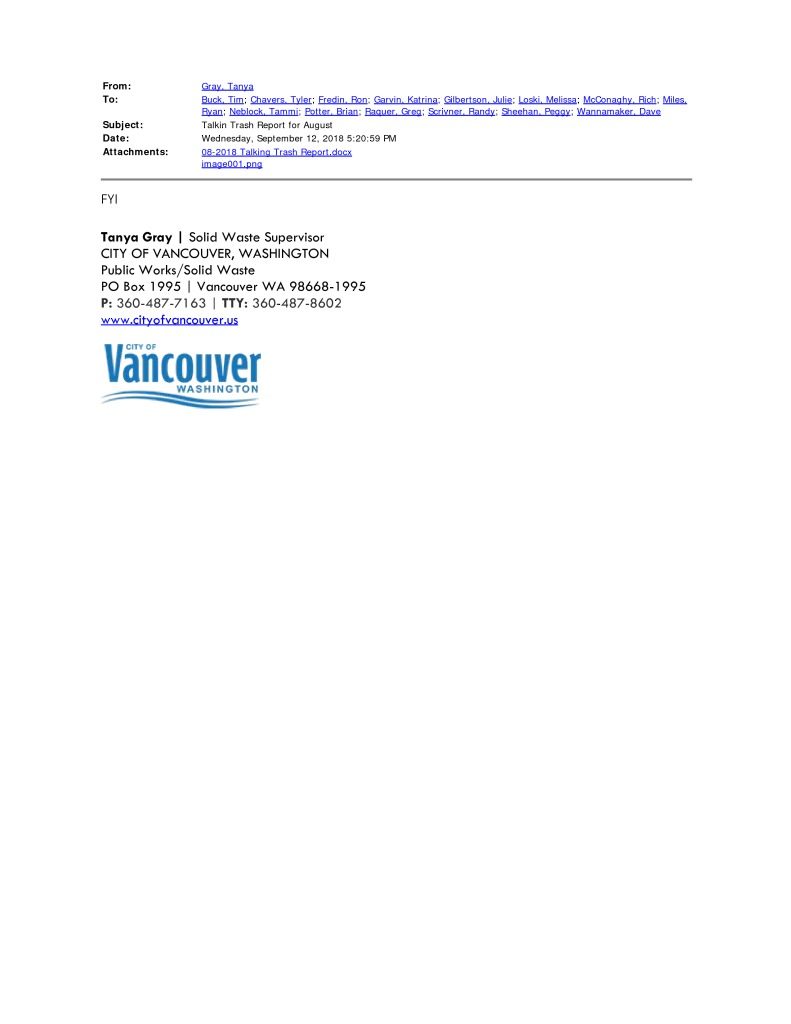 Vancouver police and other city officials ramped up efforts this fall to clear out homeless encampments on the streets surrounding Share House, the men’s homeless shelter downtown.

The area has been a source of ongoing complaints since before ordinances outlawing camping and storage of personal property were put into place more than three years ago.

In the past, the blocks have amassed dozens of tents. Earlier this week, the streets around the shelter were occupied by only a handful of homeless people and tents, which were partially collapsed during the day.

Through a public records request, The Columbian obtained emails sent between Sept. 12 and Dec. 12 detailing the stepped-up cleanup and enforcement efforts.

The emails indicate that the Vancouver Police Department, particularly through its resurrected bicycle officer unit, was trying to more thoroughly enforce the ordinances, which prohibit camping and the storing of property between 6:30 a.m. and 9:30 p.m. Besides Share House, the emails mention cleanups along the Burnt Bridge Creek Greenway and Pearson Field.

According to data from Clark County District Court, Vancouver police issued 303 citations this year for either unlawful camping or unlawful storage of personal property as of Nov. 30. About half of those citations were issued in October and November alone.

Some of the emails obtained by The Columbian mention health and safety issues: assaults, fights and a jug of urine that exploded in a city employee’s face during a cleanup. The rise in the unsheltered homeless population has created challenges for the city as it addresses homelessness.

Vancouver Police Department Lt. Greg Raquer, who oversees the neighborhoods surrounding downtown, sent an email Sept. 11 to several officers about a planned cleanup near Share House. During these semi-regular cleanups, campers are expected to vacate so street sweepers can clean the area and sanitizing agents can be applied.

Raquer said in his email that the area hadn’t been addressed in several weeks and there had been complaints from several sources. He wrote that for the next month, beat officers and the neighborhood police officer should go to Share House at least once per shift to enforce the city’s ordinances, typically through issuing citations.

Officers replied to the email, saying they had issued citations and made arrests.

On Oct. 5, Cmdr. Dave King sent out an email to Vancouver police sergeants, asking them to remind their officers of the city’s camping ordinance.

“We have not actively enforced that ordinance at all times based on limited patrol resources, but the law is on the books. As the new bike units are contacting violators, they tell the bike officers that ‘so and so officer’ said it was OK to camp here at the Share house or other location. Please have your officers refrain from providing inaccurate information to people camping,” he wrote.

In past interviews with The Columbian, homeless people who have stayed around Share House have expressed confusion with what police expect of them, whether that means collapsing their tents, leaving the area altogether or something else.

In an Oct. 16 email to staff at Share, Vancouver Housing Authority and Columbia River Mental Health Services, Peggy Sheehan, the city’s community and economic development programs manager, said bike officers were engaging with people camped on the west side of town every day. Katie Louis, director of Share House, replied the following day and said she hadn’t yet seen a significant reduction in campers.

The following month however, in an email titled “bike unit update,” officers said 13th Street between King and Lincoln was almost clear and that one homeless man was moving all of his stuff to storage.

“We have been able to get most people to move, or clean up their stuff before we come around” usually 7:30 a.m., Officer Danielle Wass wrote.

Officer Brian Ruder replied to the email: “We have been citing everyone who is unlawfully storing their tents/items in the Share House area. (Cpl.) Rey (Reynolds) and I figure they have been warned enough by now, and it is officially open season for us.”

He said he had used orange pens to mark abandoned property and said the property owners should be cited if they’re ever nearby.

Wass signed her email caccia felice and Ruder signed his weidmannsheil, which both translate to “happy hunting.”

In a Nov. 12 email to Amy Reynolds, the deputy director of Share, King said the bike unit was asked to incrementally take back sections of the area from those unlawfully camping during daylight hours and hoped it addressed her organization’s concerns. (Share provides homeless services and runs Share House.)

Ruder said in a Nov. 18 email that the transient population seemed to have hit a plateau and was keeping to 12th and Lincoln streets with few exceptions.

“As we begin to move into colder (wetter) weather, we will be sensitive to the needs of those on the street. In the meantime, we will take advantage of the nicer weather while we can,” he wrote.

On Dec. 2, Raquer sent out an email saying there would be no Share House emphasis.

However, a few days later, on Dec. 5, Cpl. Rey Reynolds, who’s part of the bicycle officer unit, emailed a code compliance officer asking if she was available that morning to do a patrol emphasis at Share House.

“Numerous people are flaunting the law and refuse to heed several days of warnings to comply,” he wrote.

Later that morning, Chavers emailed Chief Assistant City Attorney Jonathan Young about the “unscheduled cleanup.” Typically, Chavers gives service providers a heads up when there is a scheduled cleanup, but he wasn’t aware of this one. He noted that it was 28 degrees that morning and the Council for the Homeless had issued a severe weather alert through Dec. 6.

“Aside from the cold weather issues, policy/procedure issues, etc., this is sending mixed messages to everyone — those who are living outdoors, and the city staff who normally conduct these cleanups. Mixed messages make it harder for everyone to do the job right, and really impacts how the homeless respond in the future,” he wrote.

Raquer indicated that the bicycle officer unit had verbally warned homeless campers earlier in the week. In an email, he said another city department takes the leads on cleanups.

Public Works Director Brian Carlson was part of the email chain and wrote: “My understanding is that I heard we had a cleanup today that we probably should not have had because of the temperatures. Or at least there seemed to be some noise to that effect.” He acknowledged that the work is challenging.

Another cleanup was scheduled for Dec. 13.

Tags
VancouverWest Vancouver
Receive latest stories and local news in your email:
By signing up you are agreeing to our Privacy Policy and Terms of Service.