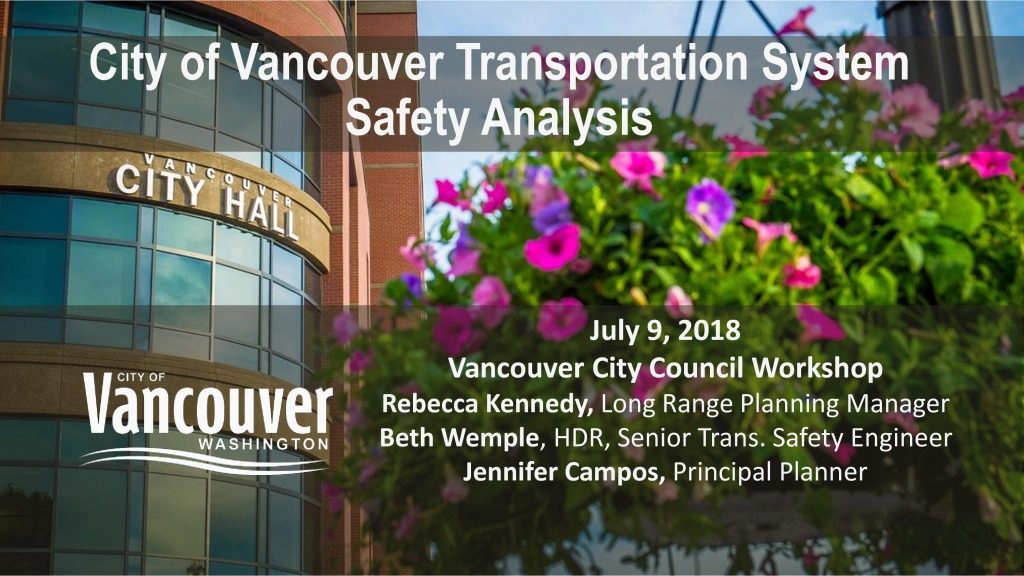 After decades of downward progress, the number of fatal and serious injury crashes nationally and statewide are trending upward. The same largely holds true in Vancouver.

City officials discussed some of the key findings of a Transportation System Safety Analysis by the city of Vancouver during a presentation to the Vancouver City Council during a workshop Monday.

Above all: Vancouver drivers are driving too fast, getting distracted and having trouble safely navigating their way through large intersections; the city’s pedestrians are especially at risk; and there are solutions that can be applied to specific intersections and across the city’s roadways that could improve safety conditions.

The city built the report by examining the years 2010 to 2016 with crash data from the Washington State Department of Transportation to build its analysis. They also used crash trend data to compare Vancouver’s crash factors to those included in the state’s strategic highway safety plan, Target Zero. The city then took the data a step further and looked deeper into the data and analyzed crashes at specific intersections and road segments.

Vancouver has the highest rate of pedestrian fatalities and serious injuries statewide, according to WSDOT. The city of Vancouver counted about 400 pedestrian-vehicle collisions, about 26 percent of which were fatal or resulted in serious injuries.

Nearly 45 percent of Vancouver’s streets are four- and five-lane roads, yet they were home to more than 55 percent of crashes the city counted. Pedestrians were also most at risk on those streets than smaller roads. About 63 percent of pedestrians struck on city streets in the last seven years were hit on four- or five-lane roads.

“We are hurting pedestrians because speeds are higher. Anything over 20 mph, and the potential of severity skyrockets,” said Beth Wemple, a transportation safety engineer from HDR who worked with the city on the analysis.

The report also found the city’s young drivers are more often involved in car crashes than any other group, but when they are involved, someone isn’t usually hurt or killed. Young drivers, between ages 16 and 25, were involved in about 3,500 crashes, but only about 2 percent were fatal or serious.

In crashes that resulted in someone being killed or seriously hurt, distraction, speed, alcohol and unrestrained passengers were the most common factors. However, the distribution wasn’t even across the board. In 2015, distraction or inattention was a factor in more than 500 crashes; intoxication was present in fewer than 100.

Combining crash frequency, serious injury and fatality and involvement of pedestrian and bicycles, the city drafted a list of 10 intersections that would most benefit from safety improvements, based on the risk factors the city examined. Most of them were on Mill Plain or Fourth Plain boulevards.

The city has also drafted a list of measures staff believes will improve the situation. Among them, it proposes improving bike and pedestrian facilities, improving young driver education and intervention, eliminating flashing yellow arrows in turning lanes, and the set speed limit could be lowered and/or more enforcement of speed laws, among others.

In the future, the city plans to incorporate broader community discussion about potential changes in part of the transportation plan update.

The city plans to ask if streets should change to reflect trends shown in collision analysis; how existing roads can improve safety for all users; and if the safety and accessibility needs of vulnerable commuters should be prioritized.

The city plans to finalize its report later this month or in August. The transportation system plan update is expected to begin in August or September.