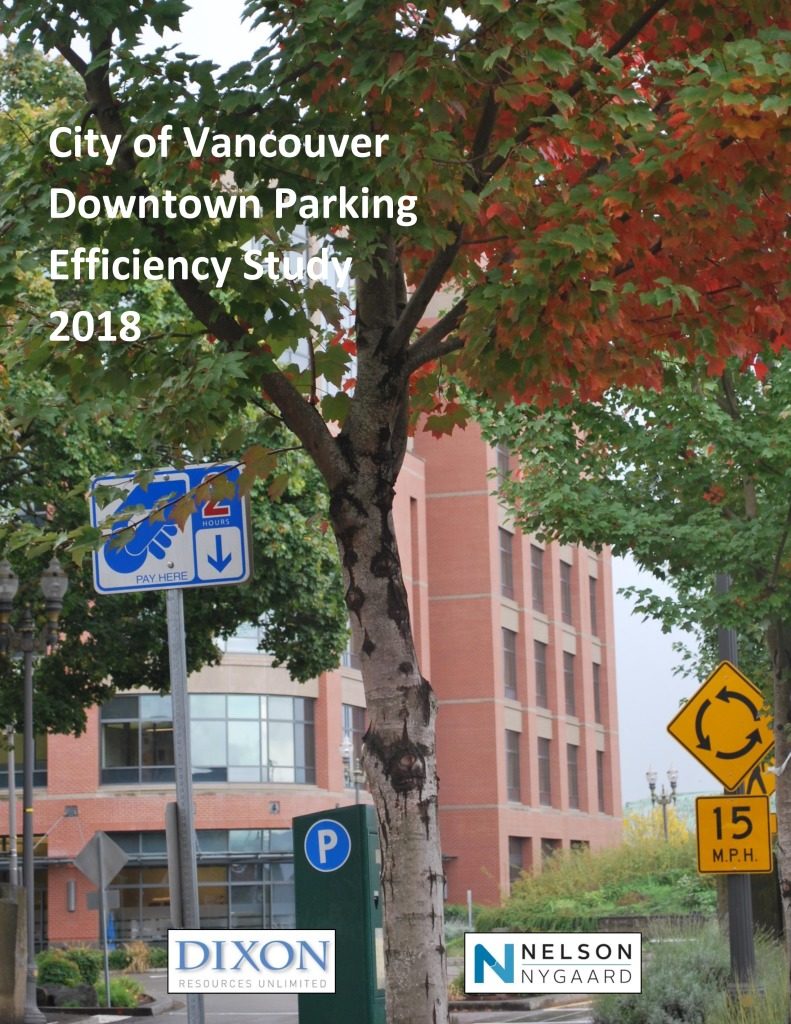 Ask almost anyone if there’s enough parking in downtown Vancouver and the response would be a resounding “no.” But that’s a misperception.

“You actually have ample off-street parking, but most people want to park at the most convenient locations,” said Julie Dixon, principal for Dixon Resources Unlimited, during a Monday evening city council workshop.

“Oftentimes, they don’t necessarily know where your off-street parking is. If you walk one to two blocks, you often have parking available.”

“This has been a really unique experience for Vancouver, because as we went out and did the assessment … staff started fixing things right away,” Dixon said.

Increasing parking rates, for example, was a priority. For a while, it was cheaper to get a parking ticket in downtown than it was to pay for all-day parking. Fines and rates were both increased in 2017 while the study was ongoing.

“We’re at the point now in parking where we need new tools and new policies in place to deal with our challenges,” said Teresa Brum, Vancouver’s economic development division manager.

There could be as many as 11 changes to the parking policies implemented in the next two years, all based on data and analysis as part of the efficiency study.

Topping the list of recommendations is getting rid of the 20-minute free parking option.

“You now have people that are literally going out there and pushing the button (over and over),” Dixon said. “It’s a lovely benefit to offer, but it’s something that has lived out its existence — at least in Vancouver.”

Councilor Linda Glover fully supports the proposal. She said that as a retailer on Main Street, she loses business when people abuse the free parking option. And if people are using it as intended, they don’t have time to stop and shop, Glover added.

The free parking button will likely be replaced with a demand-based pricing system.

“Parking is often the first and last impression people will have of your downtown,” Dixon said. “We’re not suggesting you gouge anybody, but when you talk about demand-based pricing, you want to impact congestion and mitigate traffic issues.”

Peak times could see higher prices per hour to encourage drivers to park in a less congested area. Special event rates are also a consideration.

To further encourage efficient parking, Vancouver could opt to implement a parking app service. The city is currently testing Parkmobile, an app that lets users find parking and pay in-app.

“I think when you can balance that with demand pricing throughout the city … we’re really providing the tools to take this to the next level,” said Councilor Bart Hansen.

Further recommendations include extending the limit of prolonged neighborhood parking from 24 to 72 hours, developing a wayfinding system for downtown parking and improving the parking permit process for employees and residents. The proposal doesn’t recommend adding additional parking structures to the downtown area, something Hansen noted.

“You put in some very realistic options in here and didn’t add that one because that one’s probably not going to happen anytime soon,” Hansen added.

The study’s findings will now go to the Parking Advisory Committee for review and recommendation. Any policy changes will go before the city council between 2018 and 2020.