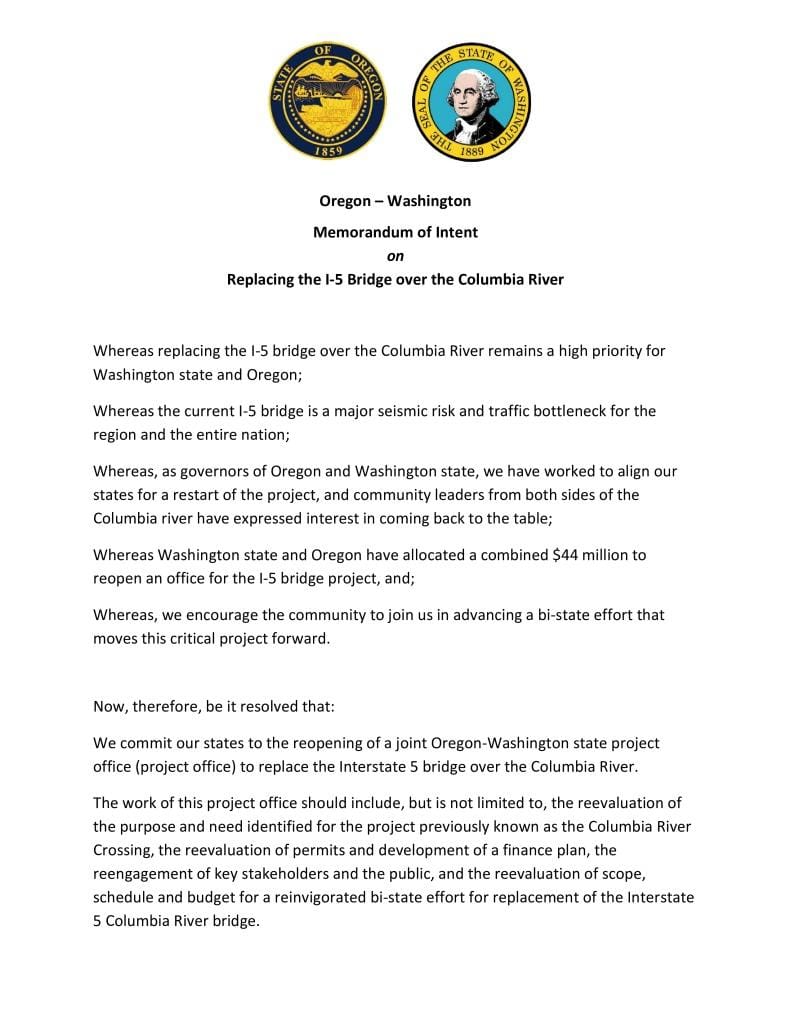 The two governors sat at a table at the M.J. Murdock Charitable Trust at The Waterfront Vancouver, with the distinctive green bridge in the background, to reinvigorate the nascent process to replace the twin spans, which opened in 1917 and 1958.

“I could not be more excited about an endeavor that unites the energies of two states,” Inslee said. “And the reason is that bridges, besides being steel, are essentially monuments to optimism. And our two states are extremely optimistic. We believe in a dynamic growth-oriented future.”

The two Democratic governors were flanked by Washington Transportation Secretary Roger Millar and Oregon Department of Transportation Deputy Director Kris Strickler, who will become director upon Oregon Senate confirmation. A number of Washington legislators and officials from the city of Vancouver, C-Tran, the Southwest Washington Regional Transportation Council, the city of Portland and Metro attended Monday’s event.

Inslee said he is optimistic this second effort will succeed, following the 2013 disintegration of the Columbia River Crossing, because of changes in the Washington Legislature and growing recognition of the existing spans’ seismic vulnerability.

“We know it is mandatory we replace this bridge,” he said. “We do not have an option. This bridge has to be replaced.”

Brown said the two states will open a joint project office to examine work previously completed and chart a new course for replacing the bridge.

“It’s high time that we address the congestion between our two states and invest in a bridge that will withstand the test of time,” she said.

Brown said her top priorities are building an earthquake-resilient bridge with high-capacity transit.

“We have to invest in the bedrock of our states’ economies, and that’s infrastructure,” she said. “When working properly, infrastructure goes unnoticed. But without it, we are literally in for a bumpy ride.”

Neither governor said the project must extend Oregon’s light-rail line into Vancouver, a major sticking point with some Clark County residents and legislators representing the county in Olympia. Lack of legislative support in Olympia, including by GOP lawmakers representing Clark County, led to the Columbia River Crossing’s demise six years ago.

The memorandum of intent signed Monday leaves open the possibility that a bridge could have bus rapid transit, instead of light rail.

“We need the smartest, most efficient, most cost-effective type of transit,” Brown said. “We are going to be doing a traffic analysis ahead of time to help us determine what’s the best solution for the I-5 Bridge replacement project.”

Inslee said although he has advocated for light rail in the past, transit decisions will be based on data, not ideology.

“We’re not setting preconditions,” he said. “We are going to be driven by data, and there is going to be a very thorough analysis of the alternatives. And we will have a very vigorous discussion with our constituencies to see what their thoughts are. I think going into this without preconditions is a really good place to be, given the history of this project.”

Inslee, however, also indicated that high-capacity transit should operate in its own space, instead of sharing traffic lanes with cars and trucks.

“The one thing I think we do understand very deeply on both sides of the river is that any high-capacity corridor has to be a dedicated high-capacity corridor,” he said. “That’s a reality that sometimes some folks have not really understood. So we will follow data-driven decisions with that geophysical requirement in mind.”

The two governors didn’t speculate on how much the project could cost and said they would be looking to the federal government for financial assistance and assume there will be tolling.

“The price tag, I can assure you, will be lower than if we wait another year or two to get this job done,” Inslee said. “The least expensive way to replace this bridge is to start today. … Other than that, the parameters are unknown because we have to design the bridge.”

Inslee said the replacement bridge should be included in any federal infrastructure package, adding that it’s hard to imagine the project would not be in the top echelon of transportation needs nationwide.

Initiative 976, which will cut car tabs to $30 and rescind additional transportation charges enacted by local governments, will not torpedo the new bridge effort, he said. The measure, approved by Washington votes in the Nov. 5 election, will eliminate about $1.92 billion in state revenues over the next six years, according to the Washington Office of Financial Management.

Inslee announced the day after the election that he has directed the Washington State Department of Transportation to postpone projects not yet underway.

“This is a safety issue, a replacement of an existing bridge,” he said Monday. “Our freeze, if you will, applies to new capacity infrastructure. So we will move forward with the joint office.”

After Monday’s signing, the two governors posed for photos with legislators and other officials before holding a 30-minute closed-door meeting with invited participants. They later traveled to Salem, Ore., for meetings with Oregon legislators.

The two-page memorandum of intent signed Monday makes only a few commitments:

• Open a joint Oregon-Washington project office that will re-evaluate the purpose and need and permits for the failed Columbia River Crossing project.

• Assume that any plan for a new bridge will include high-capacity transit.

• Develop a finance plan for the project that assumes some costs will be covered by tolls.

• Evaluate project scope, schedule and budget for replacing the bridge.

• Re-engage key stakeholders and the public on replacing the bridge.

The project office is supposed to provide a draft progress report to the two states by Dec. 1, less than two weeks away, and a final report by Dec. 1, 2020.

The memorandum of intent takes effect immediately and lasts for five years, with the potential for amendment or renewal by consent of both governors.

Either state can terminate the agreement unilaterally by providing three months’ written notice.

Tags
Interstate 5 BridgeJay InsleeRoads & TransportationWest Vancouver
Receive latest stories and local news in your email:
By signing up you are agreeing to our Privacy Policy and Terms of Service.