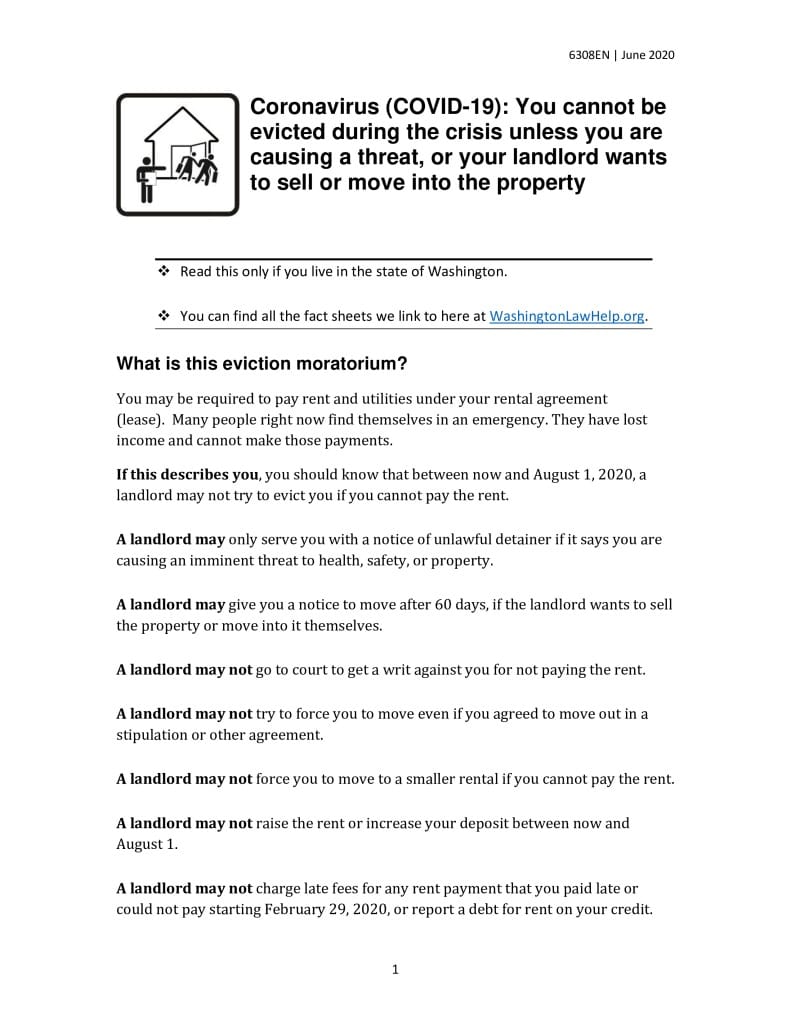 With Washington’s eviction moratorium recently extended through Aug. 1, local renters who are struggling financially during the COVID-19 pandemic are breathing a sigh of relief.

“We know that can be scary for tenants to initiate sometimes,” she said, which is where legal aid organizations like hers come into play.

The extended moratorium reminds tenants that if they can pay rent, they should. Tim Murphy, an attorney with the Northwest Justice Project’s Vancouver office, encourages tenants to inform their landlords in writing if they cannot pay rent, so there is a paper trail. Jessi Anderson, legal director with Clark County Volunteer Lawyers Program, added that tenants should keep copies of all notices and communication with their landlord, even if it’s just a cellphone picture of a written document.

If a landlord retaliates against a tenant by threatening to evict them or by not offering a reasonable payment plan, the moratorium says that retaliation can be used as a legal defense, Murphy said. 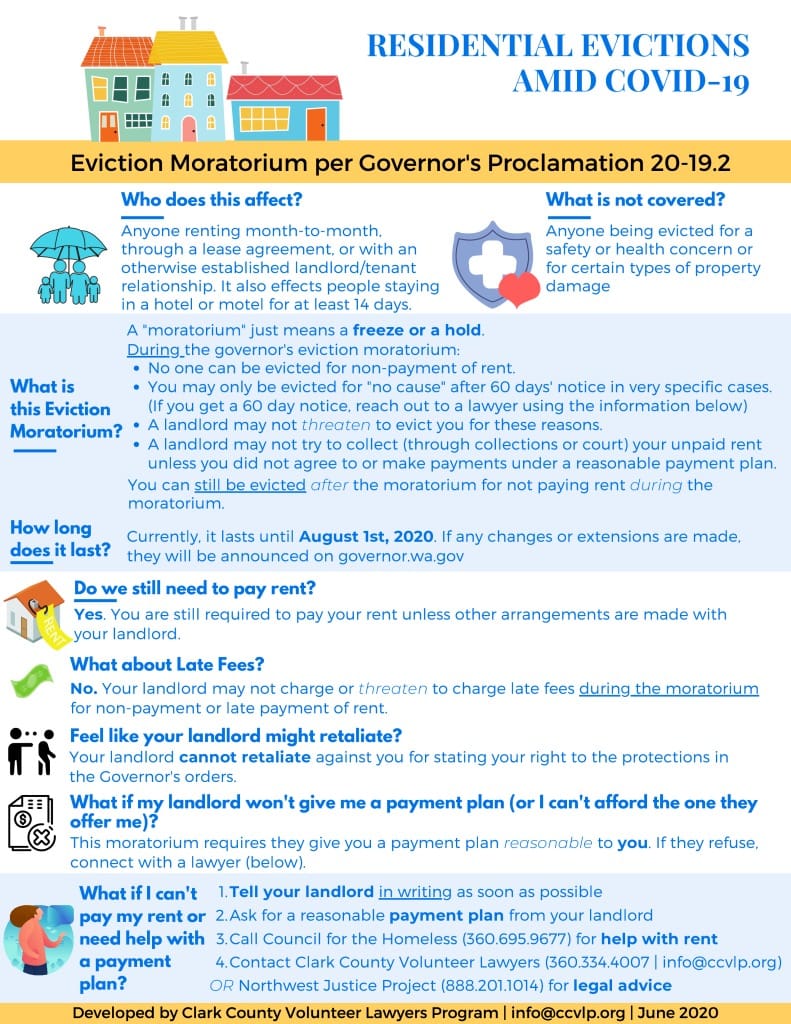 “People should be well aware they shouldn’t be coerced into signing a payment plan,” Anderson said.

She’s worried that landlords may offer the same payment plan to everyone who lives in the same building. The plans are supposed to be personalized to each tenant’s financial situation.

Tenants who believe their landlord violated the eviction moratorium can file a complaint with the state attorney general’s office.

The moratorium continues to allow evictions in cases of imminent threats to health or safety, such as a domestic violence situation, and adds serious property damage as an exempt cause. It also says landlords have to give tenants 60 days’ notice of their intent to sell or move into the home. Still, it’s a narrow set of circumstances where landlords can legally oust a tenant.

Lyn Ayers, secretary and past president of the Clark County Rental Association, is concerned about the moratorium extension. 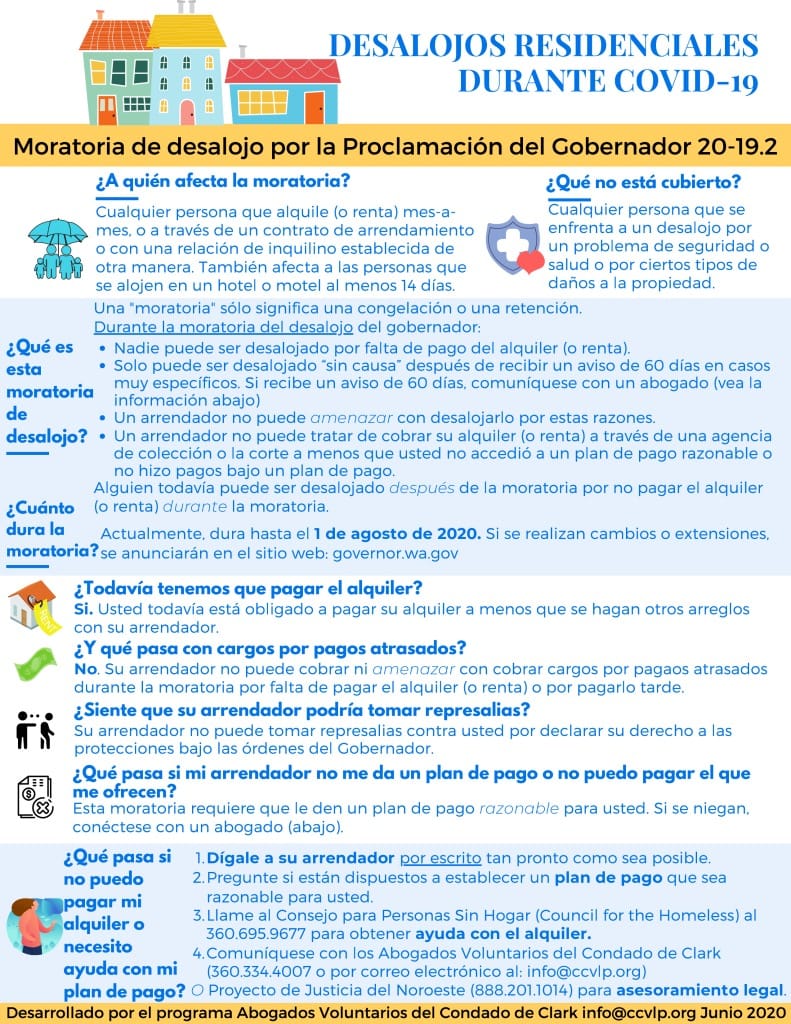 “Landlords are being looked at as the solution to the problem. We’ve got a target on our back from Olympia,” Ayers said.

In general, tenants are trying to keep up with rent and work with landlords on payment plans. There are a few instances where people deliberately aren’t paying rent or are violating lease terms or squatting in rental units. Absorbing those losses can be particularly difficult for smaller landlords. Ayers imagines some landlords may opt to sell their properties.

He noted that due to unemployment insurance fraud, the state’s system has tightened and people may have to reverify their eligibility, delaying checks. That could impact when or whether they pay rent. He’s also concerned renters who were living on the financial edge before may not ever be able to catch up.

While several organizations are providing rent assistance, it isn’t reaching everyone who needs it.

Quinn Posner, owner and attorney with NW Landlord Solutions, understands the frustration of his clients who see people take advantage of the moratorium, but acknowledged there are also many people who simply cannot pay rent. Mom-and-pop landlords who own just a couple of units are most fearful about not being paid rent and not being able to cover their mortgage.

“A lot of times the landlord isn’t a big faceless corporation,” he said.

Formal eviction isn’t in the interest of the tenant or landlord, who may not recoup the money lost. Rather, many cases are negotiated before going to court.

“If we have a flood of evictions I think we’re going to have to do that,” Posner said.

Posner said new legislation requires landlords inform tenants of legal aid resources, such as the Clark County Volunteer Lawyers Program and the Northwest Justice Project. In the past, tenants met those organizations when they came to the Friday eviction docket, but both landlords and legal aid organizations are trying to get ahead of the problem.

“The demand will increase, but we will be ready to meet it,” Fitzgearld said.

EXPLAINER: The law and science behind the CDC’s eviction ban
HealthApril 13, 2021
Other Papers Say: Help mom-and-pop businesses
ColumnsApril 4, 2021
States struggle to get rent relief to tenants amid pandemic
PoliticsMarch 30, 2021