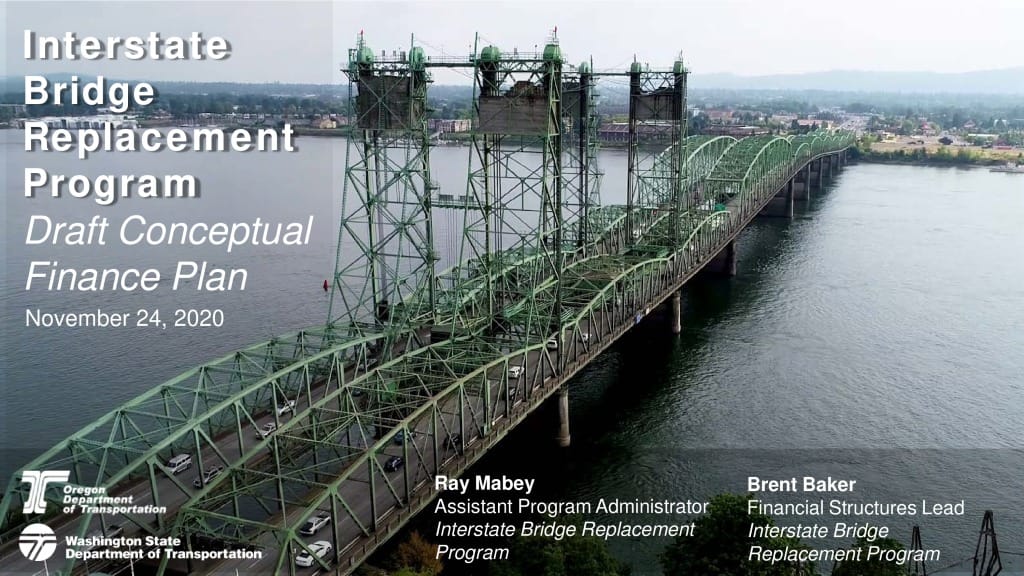 The renewed effort to replace the Interstate 5 Bridge has a long way to go before it gets an official price tag, but the Interstate Bridge Replacement Program office put forward a range of conceptual cost estimates this week based on the mothballed Columbia River Crossing project, topping out at $4.81 billion.

Officials from the program office listed the estimates as part of a draft conceptual finance plan presented at a virtual meeting of the program’s bistate legislative committee Tuesday afternoon.

Washington and Oregon convened the committee and created the project office last year, aiming to evaluate the costs of a new bridge project. The conceptual finance plan’s purpose is to identify potential funding and financing options and to calculate the range of funding gaps the project could face.

Project officials stressed that no design work has taken place for IBR Program, so all of the estimates are based only on the costs originally calculated for the CRC and are subject to change when the new project’s alternatives are developed.

The presentation included low-scope and high-scope estimates for two possible project configurations: a bridge with light rail and a bridge with bus rapid transit. The scope refers to the number of peripheral improvements included in the project, such as extending light rail all the way to Clark College rather than just downtown Vancouver, according to financial structures lead Brent Baker.

“All four (scenarios) include a replacement bridge with transit in its own fixed guideway separated from other vehicles,” he said.

The four scenarios included estimates in 2012 dollars, 2020 dollars and a “year of entry” estimate which Baker said was calculated to account for projected inflation assuming the bridge started construction in 2025 and opened by 2030.

The presentation also outlined funding and financing estimates for each of the four scenarios, along with an estimated funding gap. The estimates all included about $150 million in existing funding from the two states.

Rep. Jake Fey, D-Tacoma, pushed assistant project administrator Ray Mabey to specify how much funding Washington would need to provide to close the gap. Mabey reiterated that the numbers were highly preliminary, but said each of the two states would likely need to contribute between $750 million and $1 billion.

Early in Tuesday’s meeting, Johnson offered a brief outline of his office’s objectives for the coming year, starting with the establishment of what he described as the “three legs of the advisory stool” for the development process: an Equity Advisory Group, a Community Advisory Group and an Executive Steering Group composed of representatives from regional governments and agencies like C-Tran.

The steering group held its first meeting in early November, and the office is preparing to put out applications for the other two groups. All three groups will advise the project office, he said, while the legislative committee will function in a guidance role.

“(The legislative committee) are the ones who can give us a thumbs up or thumbs down,” Johnson told the Columbian. “The other entities are consensus organizations.”

The next goal is to establish statements for the project’s Vision and Values and Purpose and Need. The original target date for those statements was October, Johnson said, but it was pushed back to May so that the office could first focus on establishing the advisory groups to provide input on the statements.

“In June, we dive into one of the more controversial issues, and that’s the need, the desire, the vision, to see transit crossing the Columbia River associated with this bridge replacement,” he said.

The office will also look at river crossing alternatives during the summer, he said, with the goal of paring down the list of crossing and transit ideas to present to the legislative committee, which would then in turn provide guidance on the specific range of alternatives that the office should start exploring in detail.

Several legislators expressed support for the creation of the advisory groups, but also pressed Johnson about the ability of the office to keep the project moving forward at a consistent pace. Some lawmakers also reiterated a desire to avoid repeating work done on the CRC.

Johnson replied that he would work to try to reach a consensus in the event of disagreements between the advisory groups, and that the project office wouldn’t hesitate to draw on materials from the CRC if they were still valid.

He pointed to the Purpose and Need statement as an example; the core problems identified at the start of the CRC generally still apply, he said, making that program’s statement a good starting point when drafting the IBR statement. Other circumstances, such as traffic, have changed in the past decade, he said, and will require more of a restart for the new program.

Kimberly Pincheira, the program’s communications and external relations manager, gave legislators an outline of the office’s public outreach plan, which is targeted to kick off in January.

The deadline for the final version Conceptual Finance Plan is Dec. 1. The legislative committee’s final meeting of the year is scheduled for Dec. 15. The executive steering group will hold the second of its two virtual kickoff meetings from 1 p.m. to 3 p.m. Nov. 30.