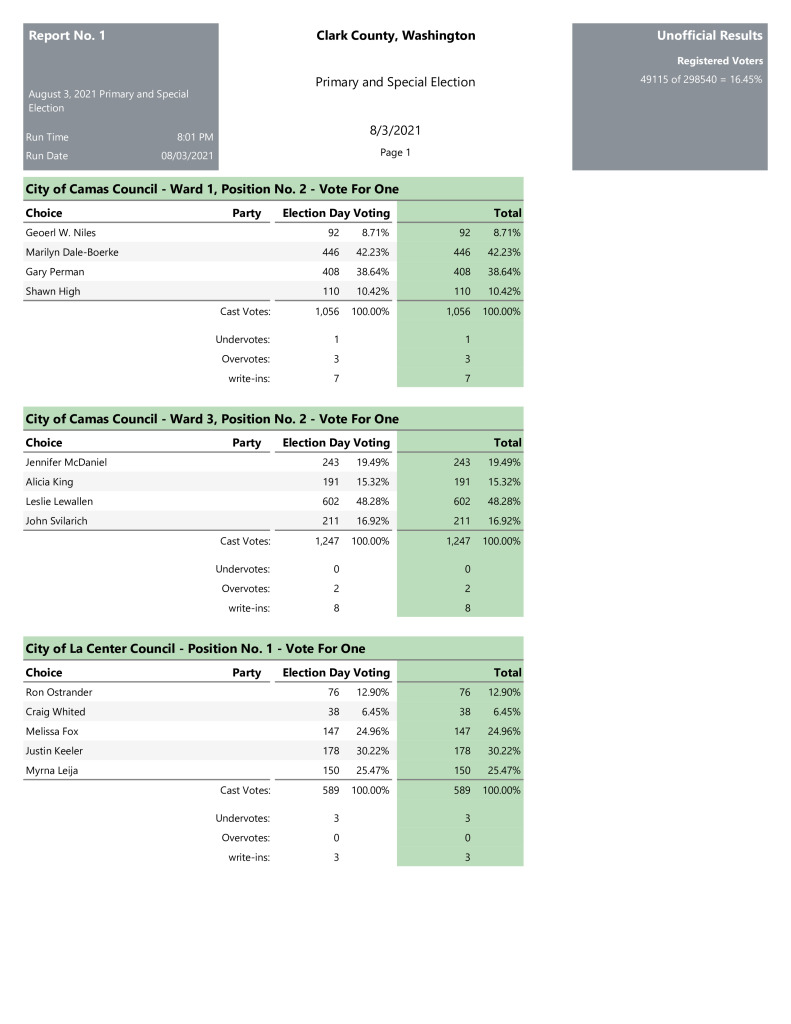 Initial returns showed McEnerny-Ogle with 68.93 percent of the ballots, compared with Bowerman’s 18.20 percent. Newcomer Doug Coop, who billed himself as the “Republican candidate” in the nonpartisan race, polled 12.87 percent in initial returns.

In other races, recently appointed Vancouver school board member Sandra Zavala-Ortega appears like to face Michelle Belkot in November after they outpolled challengers Chartisha Roberts and Kathleen S. O’Claire for Position 2. Wendy Smith, the Position 3 incumbent, led her three-way race and appears likely to face Jorge Bailey in November.

In the only contested race for Evergreen school board, incumbent Julie Bocanegra won 58.52 percent of the vote and will face Mike Appel in November.

In Camas, city council candidates backed by local businessman and conservative political operative David Madore both advanced to the November general election. Gary Perman received 38.64 percent of the vote for Ward 1, Position 2 and will face frontrunner Marilyn Dale-Boerke, who polled 42.23 percent, in November. In Ward 1, Position 2, Madore backed Leslie Lewallen, who received 48.28 percent of the vote. Jennifer McDaniel received 243 votes, enough for second place initially, but John Svilarich was only 32 votes behind, at 211. Alicia King has 191 votes.

More ballots will be counted on Wednesday and in the coming days. Turnout is hovering below the 20 percent range, as COVID-19 and summertime activities eclipsed local politics for most voters.