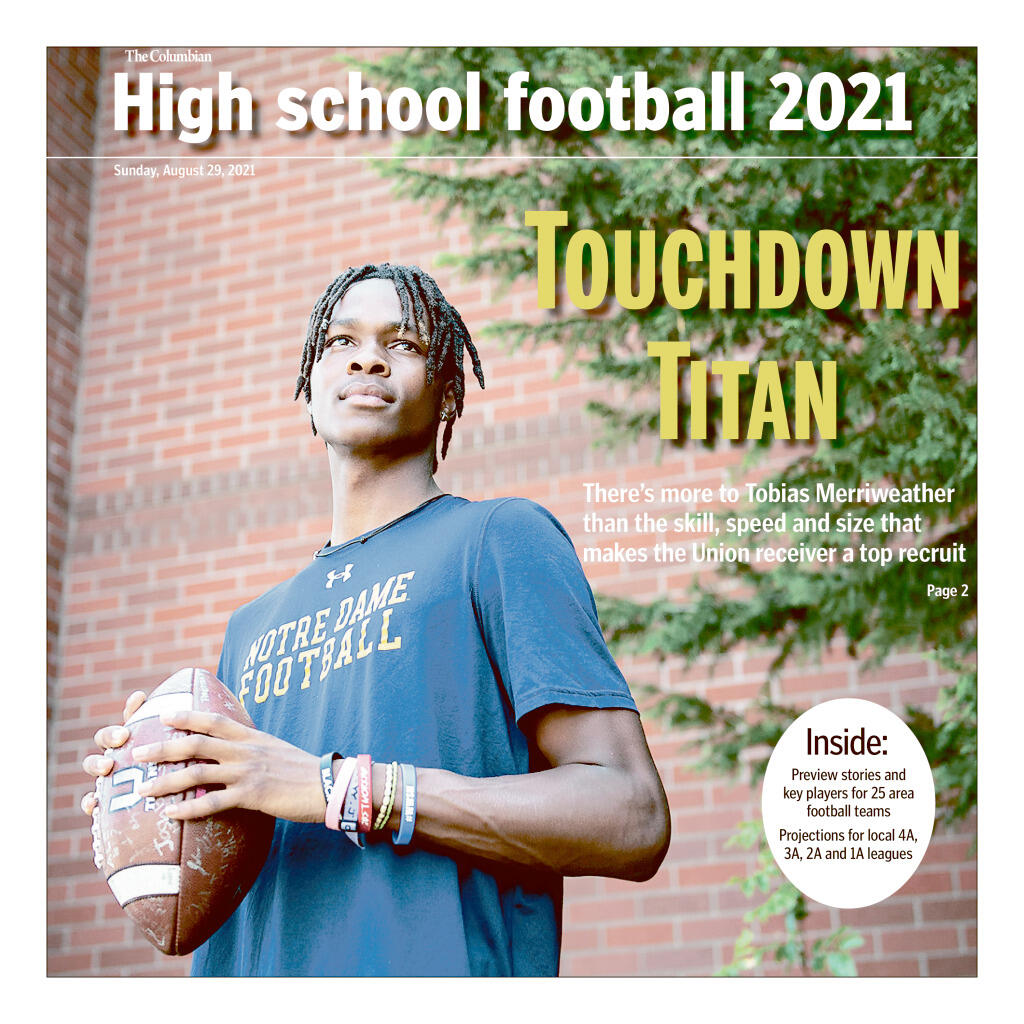 The question posed to Tobias Merriweather caused him to pause in deep thought.

How can Merriweather, Union High School’s star wide receiver and a national four-star football recruit who recently committed to the University of Notre Dame, be a better receiver?

“That’s a good question,” Merriweather said during a recent 90-minute sit-down interview with The Columbian.

His answer doesn’t dwell on what he does on the field. At 6-foot-4 and 190 pounds, Merriweather’s unique intangibles made him a sought-after recruit for every Pacific-12 Conference school and for programs as far east as Michigan and Tennessee.

For Merriweather, it’s about the little things off the field. Sitting in on quarterback meetings, being versatile and ready to play all receiver positions, and studying every aspect of an offense.

Clark County has had a strong run recently of players signing with Power 5 conference programs, and Merriweather is in a rare class of elite football recruits to ever come out of the region. On that list includes names like the late Travis Claridge, a Fort Vancouver High standout named All-American in 1995 by Parade Magazine and USA TODAY. At the time, many believed Claridge to be the best high school offensive lineman to come out of the state when he signed with USC.

Merriweather isn’t too far back, rated as the No. 11 receiver in the Class of 2022 in 247Sports’ national rankings.

The hype started in ninth grade as a tall, speedy receiver who played in big moments during Union’s Class 4A state title-winning season in 2018. Now a senior, self-made high standards for football and academics has Merriweather poised to continue that success at Notre Dame.

But in-between, the COVID-19 pandemic the past 18 months led to a new-found love for high school sports. From delays and uncertainty came appreciation and gratitude as Week 1 of his senior season begins Sept. 3.

“I have more love for the game,” the 17-year-old said, “just because I know it can be taken away from me.

From playmaker to leader

Merriweather didn’t register an official stat from Union’s 52-20 victory in the Class 4A state championship game three years ago, but there’s a memory that’s forever on tape: his false start.

It happened on Union’s final drive of the first half against Lake Stevens at the Tacoma Dome when Merriweather jumped early and whistles blew for the 5-yard penalty.

The play call was for him.

Head coach Rory Rosenbach subbed Merriweather out, and Union ran the same play again — this time using Alishawuan Taylor at the “Y” position. After Taylor’s 18-yard gain over the middle moved the chains, Rosenbach turned to his young receiver on the sideline and said, “that should have been you.”

Merriweather registered three varsity catches and also made an impact on defense as a freshman in 2018. Only after torching sub-varsity competition early in the season did he suit up on what turned out to be Union’s perfect 14-0 season.

What Merriweather gained more than anything is proving he belonged. He said the limited role was the best thing for him, and also allowed him to have a front-row seat alongside a core group of senior leaders — Lincoln Victor, Darien Chase and JoJo Siofele — to learn, grow and mature. All three now play Division I football.

Playing alongside Chase, also a four-star receiver recruit out of high school, challenged Merriweather on a daily basis. The experience of that one season together still makes a lasting impression on the senior.

“That was great for me,” Merriweather said, “because I wanted to be the person I am right now.”

It paved the way for a career as a three-year starter and a two-year captain. During Merriweather’s college commitment ceremony at Union earlier this month, Rosenbach spoke on how the COVID-19 pandemic brought out the teenager’s best qualities.

Five seconds is all it took for Merriweather to get into open space.

The way he describes an 88-yard kickoff return for a score in March against Skyview is so rich in detail it’s as if it happened last week. He credits teammates for making his work look easy.

“The most insane blocking I’ve received,” Merriweather said. … “That was such a crazy moment.”

Last spring’s pandemic-shortened season was the first time the wideout returned kicks on special teams. He had two kickoff returns for touchdowns in six games, in addition to four interceptions on defense and six receiving touchdowns.

At receiver, there isn’t a coverage from opponents Merriweather hasn’t faced. National recruiting analyst Brandon Huffman of 247Sports has watched Merriweather blossom on the 7-on-7 circuit, and said there’s several factors why he became a must-have target for college programs.

“Schools love his length, his route running, his ability to get open and stretch the field and his catch radius,” Huffman told The Columbian. “He’s fast, especially for how long a strider he is. And his frame gives coaches the thought that they can bulk him up to how they want him, but his length is all natural that you really can’t touch.”

Speed is what separates Merriweather, and track and field is where he hones that craft.

The Merriweather last name is well-known at Union. His oldest sisters, Dai’lyn and Jai’lyn, won nine track and field state titles from 2014-17 and still own several school records in the sprints. They now compete at Oklahoma.

Their brother has carved his own path on the track, too. In June, Tobias Merriweather completed the track and field triple crown of sprints, winning district titles in the 100 (10.95 seconds), 200 (22.01) and 400 (49.78) meters. He hoped for just one sprints title, and unexpectedly got three on a hot day at McKenzie Stadium.

Hours later, he was on the bench for the Titans’ boys basketball game in a win over 3A Kelso.

Washington’s condensed high school sports seasons meant the Class 4A and 3A Greater St. Helens League schools had winter and spring sports happening simultaneously. Sleep was minimal, he said, and time management was critical. But one of his greatest joys from a hectic few months goes beyond a co-league championship in football and individual track titles. It’s the role he played off the bench in basketball, ending with him cutting down part of the net in June after Union captured the district championship.

Merriweather knows the spotlight often is on him, and chose to return to basketball after a year away to make his teammates better and have another lasting memory.

“That was fun,” he said. “I wanted to be around them and be a part of that because I knew they were going to be a good team. … I liked being a part of that. I’m just one of the boys.”

When it comes to football critiques, Merriweather can be his own worst critic.

Perhaps it’s his competitive nature, which hasn’t always been glued strictly to sports. Before wowing crowds on the field, Merriweather wowed crowds at performances as a first-chair trombonist at Cascade Middle School.

“I loved that trombone,” he said.

From reading sheet music to now reading playbooks, Merriweather didn’t want to wait to commit to the college program that checks all his boxes.

Notre Dame has what Merriweather called the “complete package” — a tradition-rich history, first-class facilities, recruiting relationships with coaches, and world-class academics. An important part of his recruiting came down to doing homework on what a Notre Dame education means for his future.

“A lot of schools sell football, but what about after football?” said Merriweather, an honor-roll student. “I’d rather get a good degree and have good alumni people and programs around me. Those connections that you’re going to make, that’s more important almost than football.

“You’re going to be set for the rest of your life.”

Merriweather said he’ll major in psychology. He has sights on where football can take him, but not before handling business in what he hopes will be a memorable senior season at Union in 2021.

What does a successful season look like? Merriweather held up his left hand and pointed to his ring finger to symbolize a state championship ring.

The perfect bookends to a memorable and rewarding high school career.

“That’s what success is to me,” he said, “but it’ll still be a joy whatever happens.”