In spring of 2021, after a few months sleeping in their car, Sharon and Jerry moved into a homeless encampment in east Vancouver’s North Image neighborhood.

Sharon, 59, is a veteran who served in the U.S. Army Reserve for 10 years. She and Jerry, 58, are both disabled, struggling with back and hip problems. The married couple have been homeless for about two years. For much of that time, they didn’t know where to turn.

They lived in the encampment for about 8 months. They felt unsafe in their tent, due to both crime and extreme weather conditions.

The Outpost features 20 small modular pallet shelters and can house up to 40 people. It also has sanitation services, portable toilets, handwashing stations, meeting spaces and a communal kitchen area.

In its first six months of operation, the Safe Stay Community has served 46 people, according to a report released Monday by the city of Vancouver. Partner agencies have received 74 referrals for medical care, mental health check-ins, education, employment, pet care and other services.

So far, 14 residents have successfully transitioned to permanent housing.

Sharon and Jerry moved into The Outpost on the day it opened last December. “Coming back here after they opened it was amazing,” Sharon said.

Though she and Jerry had used propane heaters in their tent, electric heaters made a big difference, she noted. “It was a warm, dry place to sleep, without the fear of somebody breaking in. It was more secure.”

The city’s data shows there has been a 30 percent reduction in police calls and officer-initiated visits within a 500-foot radius of The Outpost since it opened. There were 82 calls for service from January through June compared to 108 during the same period in 2021. Officer-initiated visits declined to 41 from 67.

Fire and EMS-related calls within this radius were down nearly 10 percent from last year, with only 6 percent responding specifically to The Outpost’s address.

“When there’s a large homeless camp anywhere, any kind of crime that’s happening in the area is attributed to the homeless camp,” said Vancouver Homelessness Response Coordinator Jamie Spinelli. The reduction in police and emergency calls helps debunk this perception, she said.

“The calls still exist, but they’re not coming from here,” Spinelli said. “I feel like that’s kind of been an eye-opener for some people.”

Spinelli attributes this reduction to a variety of factors, including the community’s stability. The Outpost holds events, including art groups and music gatherings. Residents can voice complaints at a weekly community meeting. Sometimes, people have cookouts for dinner, taking turns barbecuing. Though residents do not need to be sober to move in, there are no illegal drugs allowed on property.

Vancouver’s Safe Stay Communities have become a model for other cities. More than 20 groups from as far as Birmingham, Ala., and Chattanooga, Tenn., have reached out for information, guidance or to tour the sites, the city’s report says. 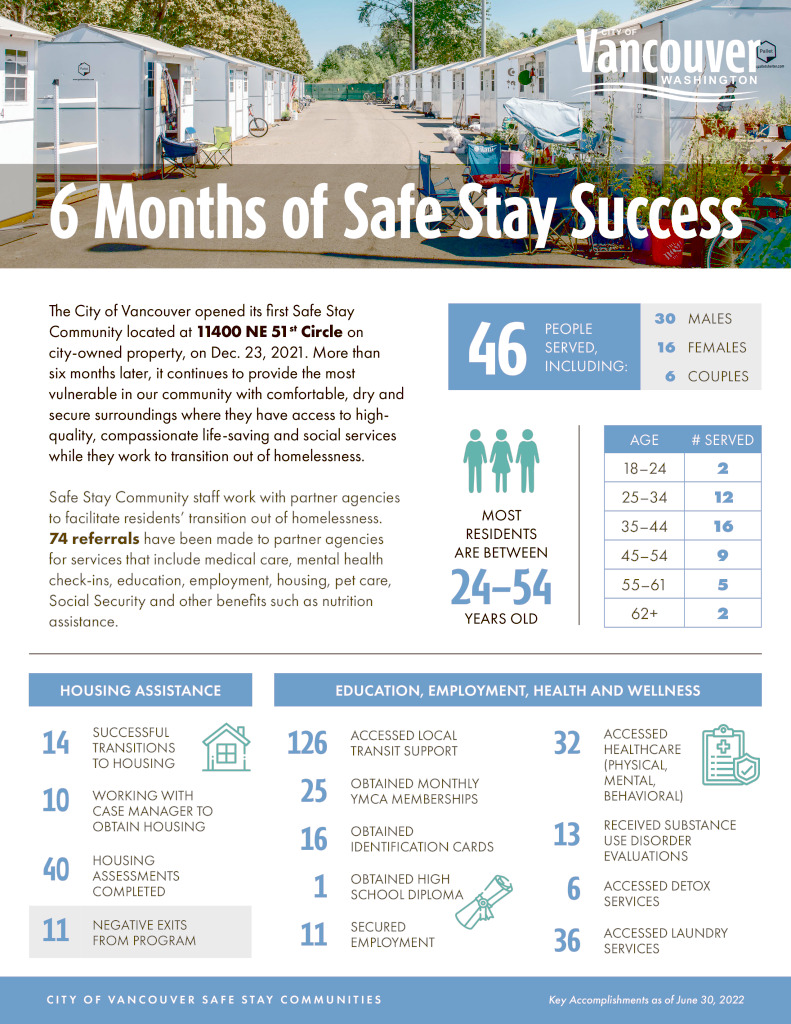 The city aims to open a total of four or five Safe Stay Communities. A second community opened in April at 4915 E. Fourth Plain Blvd., operated by Living Hope Church. A third community on the west side will hopefully open by the end of this year, Spinelli said.

Timothy Kortt, a previous Outpost resident, lived on the street for about six years. The Outpost staff helped Kortt get a job at the nonprofit organization Share’s Talkin’ Trash program. “It’s hard to keep a job when you’re homeless. I mean, it’s about impossible,” he said. “This helped me with that.”

Before moving to the community, Kortt had a hard time finding the resources he needed. At The Outpost, he got access to services he didn’t know existed.

“Everyone that works here has been homeless at one point or another,” he said. “There’s an understanding, and it’s easier to trust them.”

Two weeks ago, Kortt moved into his own apartment a few blocks from the community – one of The Outpost’s 14 residents who has transitioned to housing.

Sharon and Jerry, meanwhile, are still searching for an apartment they can afford. To accommodate for their disabilities that leave them unable to climb stairs, they need to live on the ground floor, but haven’t seen any openings in their price range.

Though the housing search has been frustrating, the couple continues meeting with The Outpost’s partner agencies to check in and look for openings.

In the meantime, they feel at home at The Outpost. “We’re the old couple on the block,” Sharon joked. She feels more connected, supported and safe than she had felt at the encampment. “It’s more of a family.”

Dylan Jefferies contributed to this story.