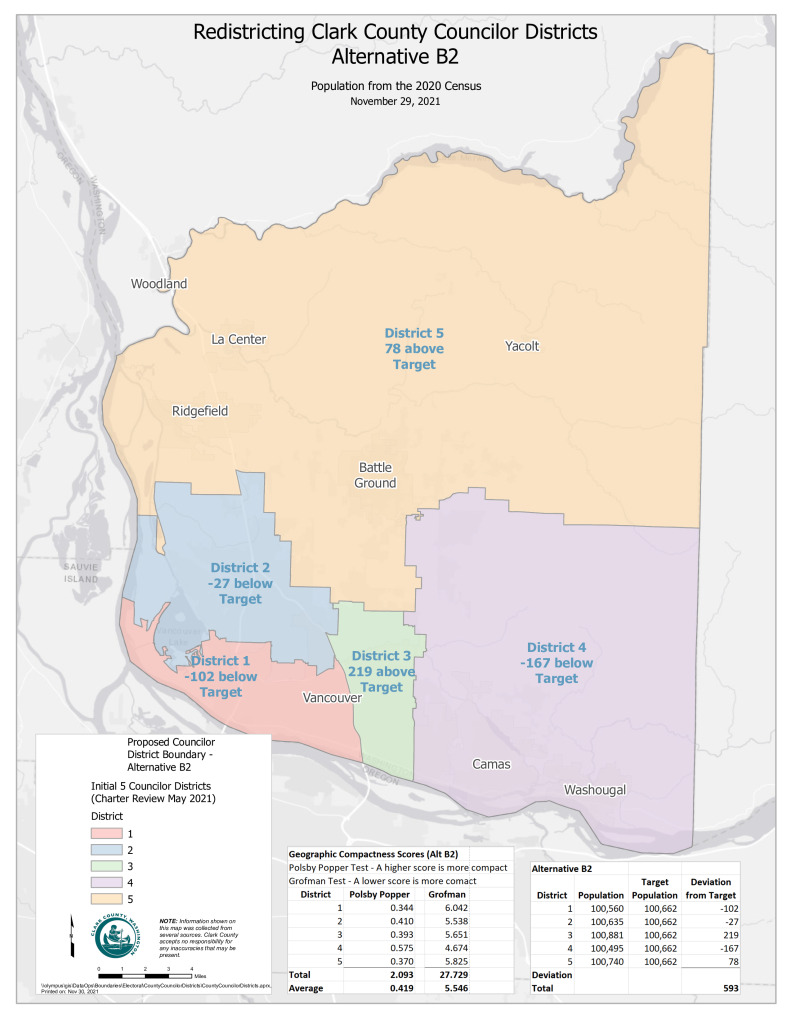 Clark County residents could have a new voting district map within the next few weeks. After months of wrangling by the county redistricting committee and Clark County Council, a public hearing on a single proposed map will be held early next month.

The redistricting committee voted unanimously Thursday to select map B2 to be presented at the public hearing at 6 p.m. Feb. 7. That map had previously been favored by the two Democratic committee members and chair Greg Kimsey.

“As a professional, when we redistrict Clark County Council districts for population for other items, it is most appropriate to keep the council districts as close as possible to what was approved by voters in November,” Paul Newman, who serves as redistricting master for the committee, said during the meeting. “Therefore, I am submitting the map known as alternative B2 to the redistricting committee.”

The redistricting master is the county staff member from the Geographical Information Systems department responsible for producing the map.

A sticking point for the Republicans on the committee has been that under the B2 map boundaries, councilors Gary Medvigy, Karen Bowerman and Eileen Quiring O’Brien would now reside in the same district.

Council members Julie Olson, Temple Lentz and Medvigy voted in favor of sending the matter back to the committee, while Bowerman and Quiring O’Brien were opposed.

As the county had already missed the county charter’s Dec. 31 deadline, Bowerman and Quiring O’Brien both expressed concerns about adding additional delays to the process.

A lawsuit filed Tuesday by redistricting committee member Janet Landesberg was also a consideration in the council’s deliberations.

Landesberg, one of two Democrats appointed to the committee by the county council, is seeking to have a judge further define the county charter, reconvene the redistricting committee to complete their work and limit the county council’s changes to any map by no more than 2 percent — and only if it could muster a two-thirds majority vote to do so.

“I am very supportive of a redistricting map that is as close as possible to the decision by the voters in November, 2022, that also meets to a very large extent the criteria set forth in state law,” Kimsey said during the redistricting meeting.

Following the public hearing, the committee could adopt the map at its next meeting, which is scheduled for 6 p.m. on Feb. 16. The map then goes to the county council, which is allowed under the county charter to make changes to no more than 2 percent of any council district — if it can muster a two-thirds majority vote to do so.

Meeting details and agendas will be available on the county website at clark.wa.gov/councilors/redistricting-committee.

Tags
Clark County Government
Receive latest stories and local news in your email:
By signing up you are agreeing to our Privacy Policy and Terms of Service.