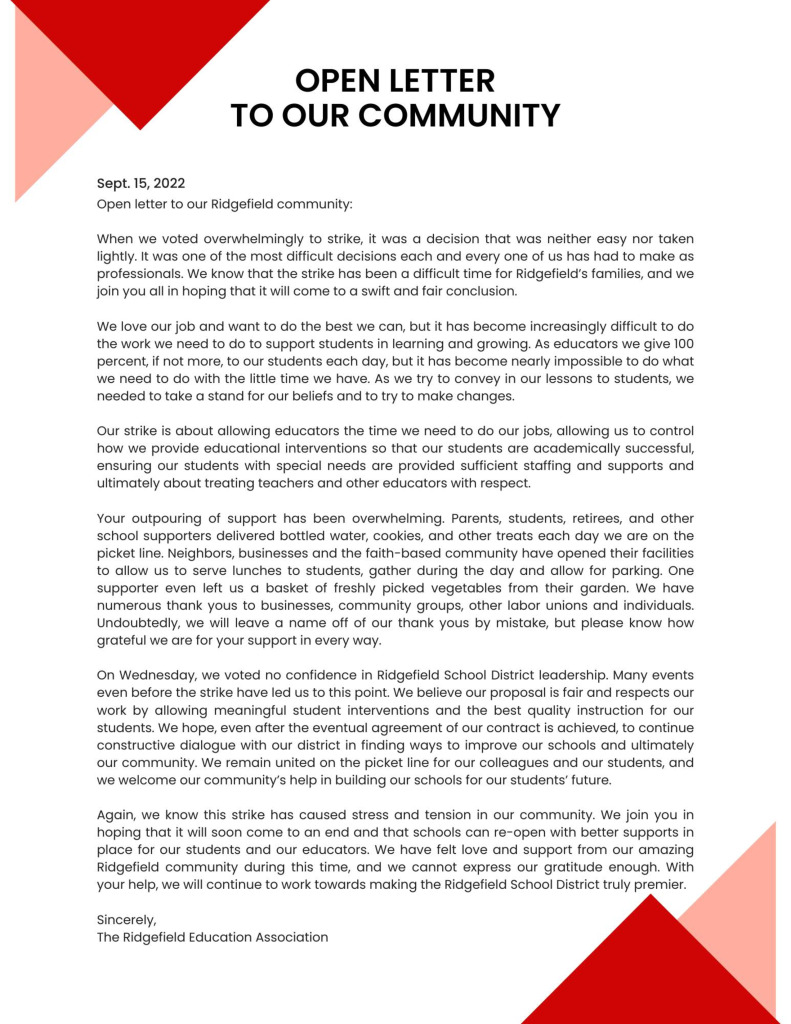 Teachers in Ridgefield remained on strike for the sixth school day in a row amid stalled negotiations with the Ridgefield School District. Schools have been closed since Sept. 9 and teachers have been without a working contract since Sept. 1.

District spokesperson Joe Vajgrt said on Friday afternoon he felt the two sides were “down to just a few sticking points.”

Following Thursday’s session, the union posted an open letter to the community on Facebook explaining the vote of no confidence in district administrators announced earlier this week. The letter explained the union’s goals.

“We believe our proposal is fair and respects our work by allowing meaningful student interventions and the best quality instruction for our students,” the letter states. “We hope, even after the eventual agreement of our contract is achieved, to continue constructive dialogue with our district in finding ways to improve our schools and ultimately our community.

“Again, we know this strike has caused stress and tension in our community. We join you in hoping that it will soon come to an end and that schools can reopen with better supports in place for our students and our educators.”

Late on Friday morning, a group of two dozen or so parents, children and community members assembled at the Ridgefield Administrative and Civic Center where the district and union representatives have been meeting. The group hoped to talk with Ridgefield Superintendent Nathan McCann or other administrators but were turned away.

Vajgrt added that the group’s presence led to the building’s closure for the remainder of the day, mentioning that district employees “felt unsafe” as members of the group led chants and knocked on doors.

Additional information regarding the status of school on Monday can be expected between 4 p.m. and 5 p.m. on Sunday afternoon.