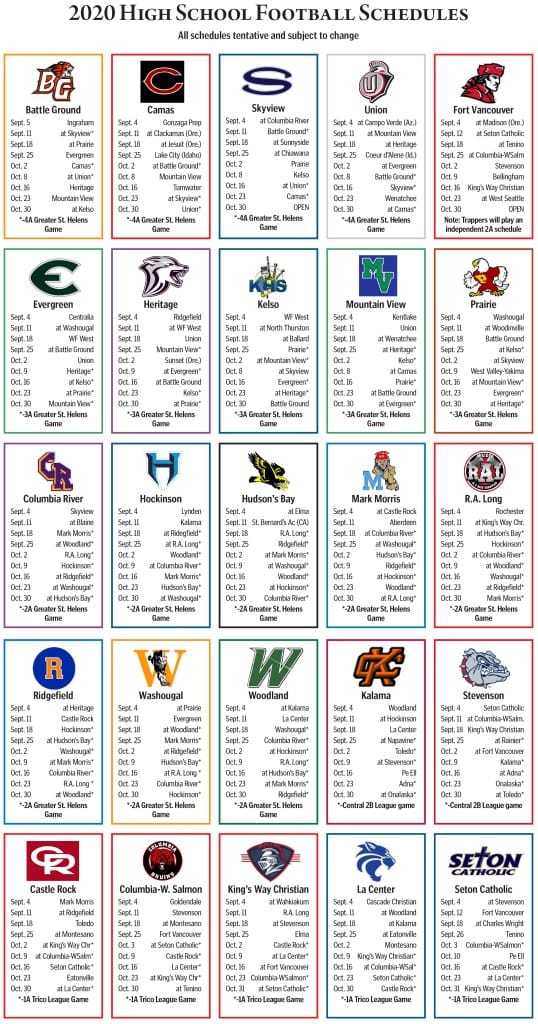 Let’s just imagine for a moment that everything will return to normal by September.

Of course, there’s no way to know that for sure.

But let’s just set all that uncertainty aside and focus on what we do know.

Regardless of what form it will take, the 2020 high school football season will see many changes to the landscape in Southwest Washington.

With reclassification, every local league will have a new look.

The 4A Greater St. Helens League will be a four-team league, consisting of Battle Ground, Camas, Skyview and Union.

The 3A GSHL will be a five-team league of Evergreen, Heritage, Kelso, Mountain View and Prairie.

The 2A GSHL will be a nine-team league, with only eight active members for football: Columbia River, Hockinson, Hudson’s Bay, Mark Morris, R.A. Long, Ridgefield, Washougal and Woodland. Fort Vancouver will continue to play an independent football schedule.

The 1A Trico League will be a five-team league consisting of Castle Rock, Columbia-White Salmon, King’s Way Christian, La Center and Seton Catholic.

Longtime Trico member Stevenson is dropping down to Class 2B and join the 2B Central League, which includes Kalama.

So let’s focus on what’s now: 10 things to know about the tentative schedules of high school teams from Castle Rock to White Salmon:

During the reclassification process, Battle Ground took advantage of a new rule by the Washington Interscholastic Activities Association by applying to allow its football team to compete as a 3A school. The Tigers’ appeal was rejected. Still, Battle Ground filled its schedule with games against teams it was hoping to play as a member of the 3A GSHL. Perhaps, the Tigers will use the results from these games to make another case to drop down to 3A in the future.

The 2019 4A state champion Camas Papermakers have loaded up their schedule with some quality opponents like Gonzaga Prep, Lake City of Idaho, Tumwater and Oregon schools Clackamas and Jesuit. But the farthest Camas fans will have to travel for a road game is to Beaverton, Ore., to play Jesuit.

3. Seven straight at McKenzie for Union

After a long road trip to open the season against Campo Verde of Gilbert, Ariz., the Titans return to Vancouver to play seven straight at McKenzie Stadium, including three “road” games against Mountain View, Heritage and Evergreen. Union also has non-league games against Coeur d’Alene (Idaho) and 4A state qualifier Wenatchee.

4. Prairie seeks out a challenge

In past years, Prairie preferred to fill out its non-league schedule with 2A opponents or teams from Oregon. But after the best season in years, the Falcons are facing four 4A non-league opponents — Battle Ground, Skyview, West Valley of Yakima and 4A state semifinalist Woodinville.

5. No Kelso vs. Longview

Kelso’s rivalry with R.A. Long (and its predecessor, Longview High) dates back to 1923. And while that rivalry has had some gaps over the years, the Hilanders also have a long rivalry with Mark Morris. So it may very well be true that it has been nearly a century since Kelso didn’t have a Longview school on its football schedule. But that’s how Kelso’s 2020 schedule looks like. The Hilanders have not lost to a Longview rival in six years and last year Kelso swept the Monarchs and Lumberjacks by a combined score of 110-0. So both teams are off Kelso’s 2020 slate. Kelso instead will fill out its non-league schedule with the likes of W.F. West, North Thurston, Ballard, Skyview and Battle Ground.

And speaking of long rivalries, Fort Vancouver and Hudson’s Bay have played 68 times for the Peace Pipe Trophy. But with the Trappers continuing to play an independent schedule, they don’t have the Eagles on the 2020 schedule. Like other 2A GSHL teams, Bay will play its final seven games within league, leaving only Weeks 1 and 2 open for non-league games. Bay has Elma and St. Bernard’s Academy of Eureka, Calif., on the schedule.

7. Hockinson starting out with finalists

With the 2A GSHL teams playing seven league games each, it leaves each team to play non-league games in Weeks 1 and 2. And Hockinson may have the most compelling non-league matchups. The Hawks host Lynden in Week 1 in a rematch of the 2018 2A state title game followed by a matchup with three-time 2B state finalist Kalama in Week 2.

Columbia River resides near Washington’s border with Oregon. Last year, the Chieftains went nearly to the Idaho border to play a non-league game with Clarkston. This season, River will travel nearly to the Canadian border to play Blaine in Week 2. Meanwhile, Woodland took a different route with its two non-league games: playing its closest neighbor to the north (Kalama) in Week 1 and its closest neighbor to the south (La Center) in Week 2.

La Center coach John Lambert has long been an advocate for tough non-league opponents. It means La Center often starts league with a win-loss record that doesn’t dazzle, but the matchups get the Wildcats ready for league play. This fall is no different for the Wildcats with matchups against Woodland, Kalama and 1A state participants Montesano and Cascade Christian.

After many years as a member of the 1A Trico League, Stevenson is sliding down to Class 2B this fall. But in filling out their non-league schedule, the Bulldogs have some familiar Trico foes: Seton Catholic, Columbia-White Salmon and King’s Way Christian.