Neighborhood aerial fireworks displays in unincorporated Clark County will be allowed, after all.

The Clark County Council on Tuesday held a public hearing to consider repealing a controversial ordinance that banned all but Class C, commonly known as “safe and sane,” fireworks. The reversal passed by a 3-2 margin.

The ordinance in December also passed with a 3-2 majority, but Tuesday’s decision was not a surprise. Since then, Councilor Karen Bowerman, who previously voted to hold the hearing Tuesday and decided against the fireworks restrictions, has replaced former Councilor John Blom, who voted in favor of them in December.

Fireworks that qualify as “safe and sane” under the Dec. 1 ordinance travel no more than 1 foot into the air or no more than 6 feet on the ground. The ordinance would have taken effect a full year after that date and wouldn’t have applied to fireworks shows such as those at Fort Vancouver National Historic Site or the Clark County Events Center at the Fairgrounds.

Changes to fireworks rules have been discussed by the council for several decades, and the county has previously restricted the dates and times in which the explosives can be sold and used.

Before the council passed the December ordinance, county residents had submitted about 230 written comments — roughly 63 percent of which opposed the restrictions. 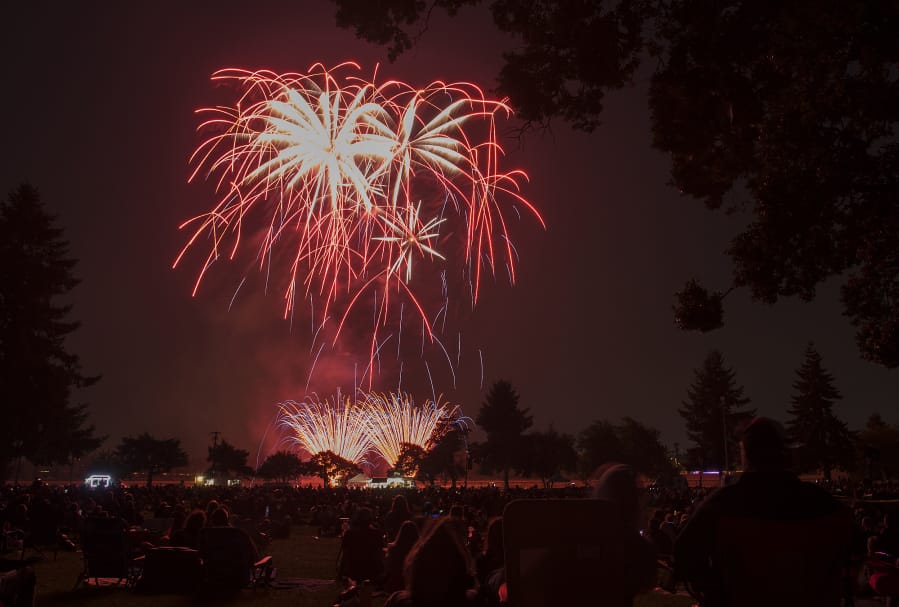 Fort Vancouver fireworks show canceled for 2nd year due to pandemic
For the second year in a row, the skies over historic Fort Vancouver will stay dark and quiet on America’s birthday.

On Tuesday, Interim County Manager Kathleen Otto said that 970 written comments had been submitted, though more were coming in as the hearing was underway. A handful of people offered their comments verbally during the virtual meeting.

Otto said that 56 percent of the 970 written comments supported the restrictions, a reversal of the majority position among public commenters from the December hearing. The comments in favor of the fireworks restrictions touched on familiar themes, including safety hazards, waste and negative effects from noise for certain residents and pets.

For several weeks before the hearing Tuesday, some residents had been circulating a referendum petition to overturn the new rules.

Councilor Julie Olson has suggested that the council either wait for the outcome of the petition or call for an advisory vote on a future election ballot. The advisory vote would give residents a chance to weigh in on the restrictions but not require any specific action on the county’s part.

On Tuesday, Olson, who has favored the restrictions along with Councilor Temple Lentz, referenced a personal connection to the issue. Around the Fourth of July in 2017, her house outside of Ridgefield caught fire early in the morning, and the Clark County Fire Marshal’s Office later determined that fireworks likely caused the blaze.

Last summer, the Clark County Fire Marshal’s Office responded to five blazes caused by fireworks, according to Fire Marshal Dan Young. That included two house fires — causing about $40,000 worth of damage — one vehicle fire, a dumpster fire and a brush fire. More recently, Mark Christopher Evans II died after being struck by a large firework on New Year’s Eve in north Clark County.

“When any of you out there who are pro-fireworks have someone knocking on your door at 3:30 in the morning telling you your house is on fire, you may have a different perspective of public awareness,” Olson said.

Opponents of the restrictions have said that they would limit personal freedoms, particularly for those who use them to celebrate U.S. independence. They’ve also argued that the restrictions would harm local businesses that sell the explosives.

In December, Chair Eileen Quiring O’Brien and Councilor Gary Medvigy opposed the restrictions, citing the lack of a normal public comment process due to COVID-19 and that the council had already voted a couple of years ago to limit the time window in which fireworks can be used in unincorporated areas.

“(In December), too, we had pleas to put this off — to deaf ears,” Quiring O’Brien said.