CAMAS — The Nakia Creek Fire was 30 percent contained and 100 percent lined as of Friday morning, thanks in large part to the long-awaited first fall rain.

The fire has burned 1,918 acres in east Clark County to date, but is no longer growing, officials said. There are no reports of any damage to structures or injuries resulting from the fire.

Firefighters are working to reach 100 percent containment, meaning everything within 100 feet of the fire line is completely cold and no longer at risk of burning. At that point, Oregon Department of Forestry will hand it back over to local agencies, according to Natalie Weber, public information officer for the Oregon Department of Forestry, which was assigned to be the lead agency on the fire due to the team’s size and expertise. 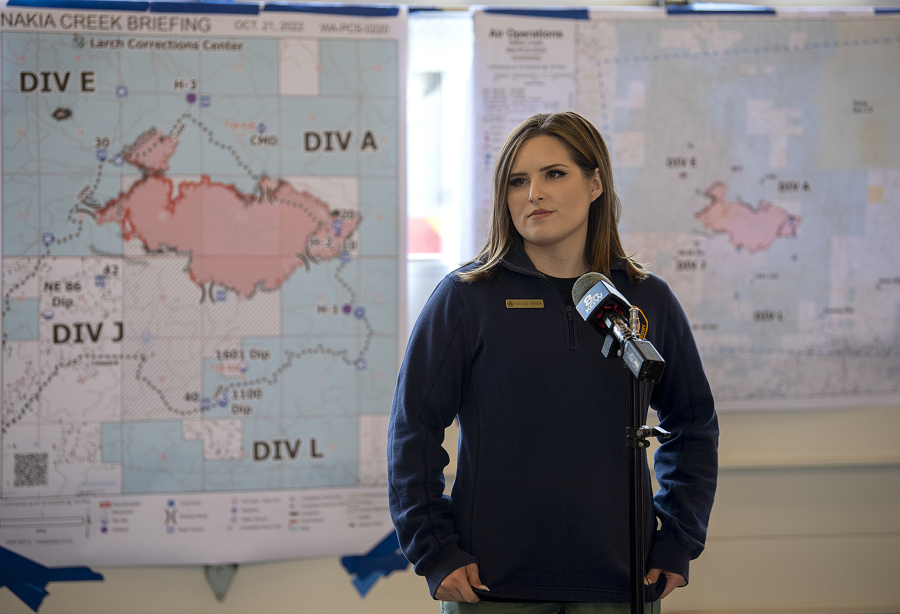 Nakia Creek firefight reaches final stages; air quality improves in Clark County
The Nakia Creek Fire was 30 percent contained and 100 percent lined as of Friday morning, thanks in large part to the long-awaited… 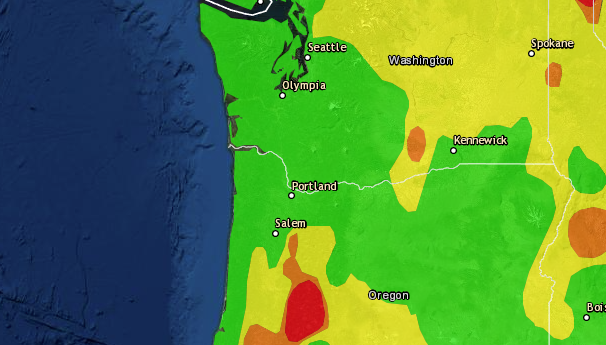 Clark County gets breath of fresh air as AQI improves for region
Air quality improved overnight, with almost all of Clark County and the Portland-metro area back in the healthy range.

More rain was forecast, which should ease fire conditions and aid in containment efforts. Air quality in Clark County, which had been in the unhealthy range for days, improved Friday morning.

All evacuation zones have been lifted, although some of the roads surrounding the fire are still closed to recreational use until the fire is 100 percent contained, according to Sgt. Chris Skidmore, public information officer for the Clark County Sheriff’s Office.

“While the forecast is favorable, the fire remains active,” CRESA said. “For the safety of firefighters and residents alike, we ask for the public’s continued assistance in avoiding the fire perimeter and respecting closed areas.” On Thursday, deputies arrested two people on suspicion of burglarizing a home in the evacuation zone.

As of Friday morning, 489 resources, such as aircraft and fire engines, were being used on the fire, down 44 from Thursday. Due to the rain, fewer aircraft were in use, according to Dave Larson, deputy incident commander.

Once the Oregon Department of Forestry leaves, residents may still see smoke from the interior of the fire, which is no cause for concern as the fall and winter rains are expected to extinguish the fire completely, according to Larson.

The Oregon Department of Forestry will be taking over management of the smaller Black Hole Fire near Yacolt at 7 a.m. Saturday morning, according to Larson. That fire had burned about 561 acres in Skamania County as of Friday.

Fire information officers will have a booth set up at the Camas High School football game tonight at 7 p.m., ready to answer questions.

Investigators believe the Nakia Creek Fire was started by people shooting pyrotechnic devices on Oct. 9 near Larch Mountain and are looking for suspects possibly driving a white Subaru.

Air quality improved overnight Thursday, with almost all of Clark County and the Portland-metro area back in the healthy range Friday.

Most of the area falls between zero to 50 on the Air Quality Index scale, solidly in the healthy range. A few areas are outliers, falling into the unhealthy for sensitive individuals range, according to purpleair.com.

Air quality in Clark County and much of Southwest Washington had been in the unhealthy range for days due to smoke from the Nakia Creek Fire settling over the area. Wildfires in the Cascades had the same effect on much of the Interstate 5 corridor from the Willamette Valley in Oregon north to the Canadian border.

“Air quality in Clark County is currently good! That means it’s a great day to open your windows and go outside for physical activity. Stay up-to-date on the latest air quality conditions,” Clark County Public Health said in a tweet.

Rain is forecast throughout the weekend and into next week, although an air quality advisory is currently still in effect until 6 p.m. Monday, according to the National Weather Service.

The Stage II burn ban remains in effect for Clark, Cowlitz and Lewis counties, according to the Southwest Clean Air Agency. All outdoor burning and the use of fireplaces, wood stoves and inserts is prohibited unless wood burning is the only source of heat for a residence, in which case the agency urges residents to burn as clean as possible.

More information about air quality can be found at swcleanair.gov, airnow.gov or wasmoke.blogspot.com.