Our NIE teachers and students look forward to the annual Serial Story that runs in The Columbian newspaper and ePaper every spring.

Every year we choose a Serial Story to run in our newspaper and ePaper for Clark County students and teachers to enjoy as an additional NIE tool within the classroom. Teachers who sign up through NIE to follow the Serial Story will also receive the story’s curriculum to use as a guide.

Typically, you will see the Serial Story in the paper running chapter by chapter every Tuesday & Thursday, March-May with the exception of spring break. 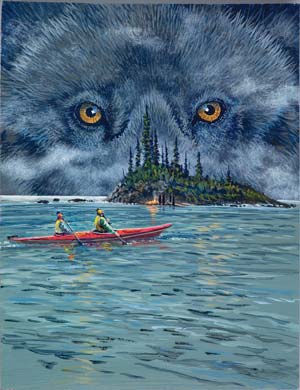 First met in Breakfast Serial’s story Desolation Canyon, the characters set out on a sea-kayaking adventure off the central coast of British Columbia. They fully expect to come across the bald eagles, wolves, bears, and even killer whales that they encounter. But what they aren’t prepared for is a more sinister type of danger: a ruthless sea captain who is determined to become rich off smuggling immigrants into Canada.

This year's serial story will appear every Tuesday & Thursday in The Columbian March 9th – May 13th. Order your free NIE copies today by filling out our NIE order form!

“The Valley of No Return”

Havasu Canyon, an Arizona branch of the Grand Canyon, is famed for its natural beauty. However, it is less well-known that floods occasionally rampage through the valley on their way to the Colorado River.

Two young people set out one afternoon in the autumn of 1909 to visit “Dead Man’s Falls,” north of the Supai Village. A prank played on them by a young member of the Havasupais Indian tribe becomes potentially lethal when a flash flood cuts off their return.

For the next several days the pair must endure cold and hunger while attempting to make their way to safety; the situation grows yet more deadly when they discover they are being stalked by a hungry mountain lion.

This is a story of two young people from diverse backgrounds—one, the son of a mining engineer; the other a daughter of the tribal chief whose people are threatened with exile from their ancestral land — and of the lessons learned as they struggle for survival.

The Columbian believes strongly in being a positive influence on education in Clark County, and we think our products and services offer a wealth of learning opportunities for students of all ages.