After a breakout 2019 football season as an all-league player at both running back and linebacker for the league-champion Falcons, those far-off fantasies quickly became much closer to being reality.

For many athletes in Southwest Washington and across the state, ongoing coronavirus concerns have played a major part in shaping what’s been a detoured path for recruiting, a path full of uncertainties and unknowns.

Their football season hasn’t been canceled, but 17 state associations — including Washington and neighboring Oregon — pushed football to spring 2021. Traditional spring and summer events where college coaches evaluate talent live were wiped out. Even a delayed football season sparks concerns among college prospects who believe their recruiting plans might be left in disarray.

Shelby picked up his second scholarship offer last week — from NCAA Division II Central Washington — to go along with an offer from NAIA Montana Tech. When asked about his recruiting process, Shelby rubs his head in exasperation, unsure of what he can do differently. 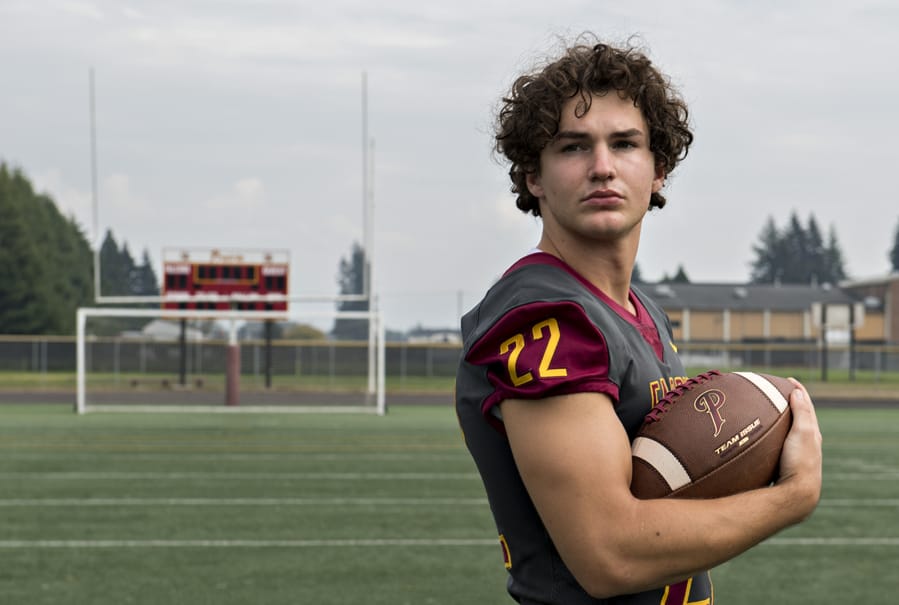 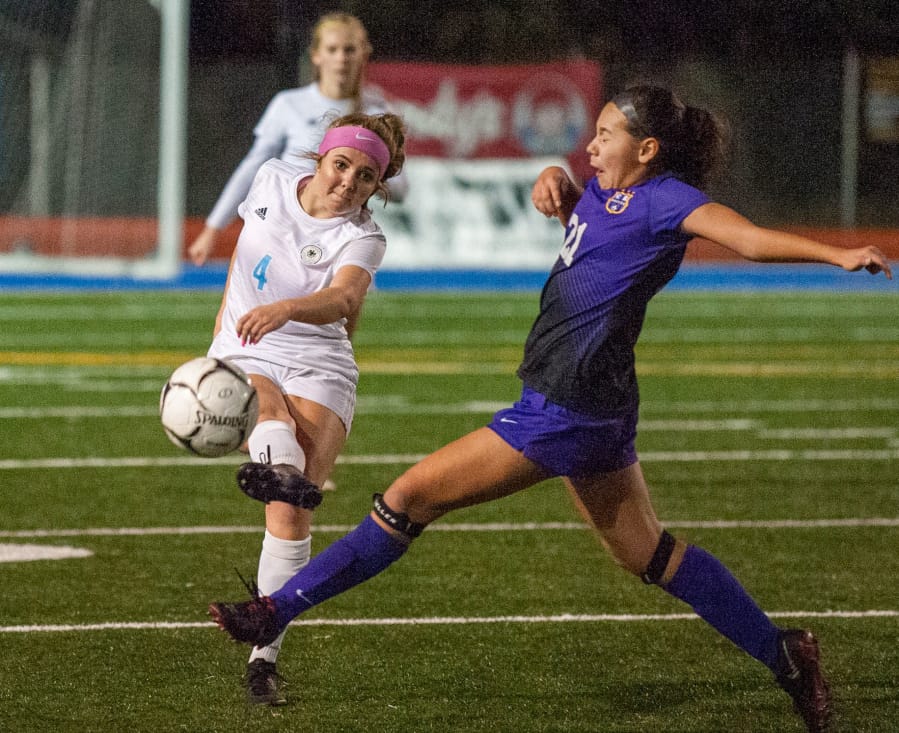 “It’s difficult,” he said with a sigh. “I think if coaches got a chance to see me play (live), meet me and get to know me, I think it’d be a different story than what it is right now.”

The pandemic upended traditional recruiting routines months ago. In March, when college campuses began shutting down, the NCAA instituted a dead period that’s now stretched through Jan. 1, 2021, meaning no in-person recruiting or on-campus visits for Division I programs. For Division II, quiet-period restrictions that were lifted Aug. 31 included no face-to-face contact with athletes away from campus. Division III has no recruiting calendar.

Phone calls and electronic correspondence, however, have remained permissible. That forced coaches to adapt and be creative using video calls to build relationships and hosting virtual visits to show off facilities.

But what hurt most is what never happened. Spring is when coaches make in-person assessments of high school athletes at events such as team camps and showcases. What normally is a crucial time for prospects to display skills were canceled.

Skyview’s Xavier Owens felt the sting. He planned a spring and summer full of 7-on-7 tournaments, team camps and showcases to attend before the pandemic killed most of it.

“I think my work ethic would have pushed me through everything,” said Owens, an all-league and All-Region defensive back. “I have a tendency and a mindset to want to be better than everyone at a camp, so I would’ve pushed myself to the limits and past the limits to make sure I shined.”

Crucial time and opportunities impacted not only athletes, but college coaches, too. Brandon Huffman, a national recruiting editor for 247Sports who is based in Seattle, said the absence of a traditional spring recruiting season hurt both parties “tremendously.”

“The spring evaluation period is key in the process,” Huffman said. “Coaches can see the physical difference in a kid six months after his most recent high school season wrapped.

There are players they wanted to see that they may have needed one or two more boxes to check before offering (a scholarship) and now they lose that.”

That’s why Shelby, from Prairie, feels stuck. As an average-sized (6-foot-1, 185 pounds) running back and linebacker, the 2019 season was his first getting significant playing time. That’s why he believes the spring and summer months would’ve boosted his profile.

“How are you supposed to get on their radar if you’re a guy like me,” Shelby said.

Without the spring evaluation period, college coaches are relying more on past assessments, but also are hearing more from high school coaches. Evergreen head coach Christian Swain said he’s been busier than ever talking to college recruiters about his players.

And most importantly, their offseason gains.

Swain gave one of his seniors, Jaylen Fite, as an example. Fite is rated a three-star recruit by 247Sports. A two-way all-league player, he ran a 4.51-second 40-yard dash at the MVP Combine in Eugene, Ore., back in July.

“He was not running a 4.51 last year,” Swain said. “He’s gotten a lot faster, and the only way to showcase that to coaches is by finding opportunities to get in front of them. Since we can’t do that, I’ve been pestering coaches and sending them all that info.”

Since COVID-19 hit, Fite, a wide receiver and cornerback, said he’s been in contact with a handful of schools. One of them is Eastern Washington, which has sent him hand-written cards from its coaching staff. Schools want to see Fite in person, he said, and coaches’ taking time to send personal notes is one of the reasons he has been able to stay positive.

“It makes me want to keep working,” Fite said. “This is the stuff I work for.”

For many current seniors, a 2020 fall season might have attracted more scholarship offers. Or, in cases like Fite, that all-important first offer.

Camas senior Jake Blair has had to be more patient than most. The three-star quarterback hasn’t seen game action since he broke his collarbone in October. The Papermakers went on to win the Class 4A state championship.

With only seven weeks of game film from his junior year, Blair creates videos of his private training sessions that he sends to college coaches weekly. The extra film helps showcase his return to health and the strides he’s made since last taking the field.

While Blair has offers from Idaho, Columbia and Georgetown, several coaches told Blair they want to see film of his first three games of his senior season. With the high school football season delayed, he’s unsure of when he’ll make a commitment.

“A fall season would have helped me a lot,” Blair said. “Before this whole COVID thing happened, I was going to make a decision after the season. Right now, I just honestly don’t know.”

There’s no playbook for how to deal with recruiting during a pandemic. Football doesn’t have a club season, like soccer and basketball do, so college hopes rest on high school performances.

College prospects — and the coaches recruiting them — heavily rely on high school game film to headline a recruiting portfolio. It’s a player’s most valuable asset.

As a high school junior, Mountain View lineman Gavin James-Dues knows he has more breathing room than current seniors to impress, but is getting a jump on his recruiting by sending sophomore year game-film highlights to more than 30 college coaches. He’s also made sure to stand out in the few chances to be seen live by coaches: by his play, and a post-event handshake and a thank you.

“That’s probably half the battle,” James-Dues said. “For one, you have to be a good player and person, but also make sure people know who you are.”

One of those events was the Cleats vs. Cancer evaluation camp in Lacey last month. What traditionally is an end-of-season all-star game benefiting cancer research turned into a pre-season event for approximately 200 high school players that focused on skill and position work. Coaching staffs from Central Washington and Pacific Lutheran attended the event.

Camps like that are a win-win for athletes and coaches, said Central Washington head football coach Chris Fisk, especially since face-to-face connections have been fewer than normal. All of Central’s coaching staff attended the event.

“Just getting out to a camp here and there and watching kids,” Fisk said, “that’s been our biggest push.”

For athletes who might believe their chances of landing on a college roster are slipping away because their high school season is delayed — think again, Fisk said. The coach said this year’s recruiting class at Central is far from being finalized. The Great Northwest Athletic Conference postponed fall sports to the spring, which alters the coach’s staff’s fall recruiting schedule.

Said Fisk: “We’ll definitely be hitting the road, and doing a lot more recruiting in September, October and November than we normally would.”

“That’s usually not a thing we have on our hands,” Fisk said, “but we have a lot of time on our hands to go slow, and bring in kids one at a time.”

At Portland State, things sit on a slightly different scale. The NCAA extended its Division I dead period through Jan. 1, and recently announced all fall 2020 Division I athletes will retain an extra year of eligibility. That could create a scholarship crunch as schools figure out how to keep older players on a roster while adding a typical recruiting class.

Bruce Barnum, Portland State’s head coach, isn’t sure yet how the extra allotment will impact his football program. The NCAA allows Football Championship Subdivision schools like Portland State and the rest of the Big Sky Conference 63 full football scholarships annually on an 85-player roster. Barnum estimates the Vikings sign between 18-25 athletes each recruiting class, but what may change is when new recruits report to campus. That’s where the possibility of grayshirting — when an athlete delays their enrollment — may come into play, Barnum said.

“The difference will be the turnaround” of when they report to campus, he said. “Maybe it’s the fall or summer or the winter, or maybe even spring after their senior year. … I think they’ll understand.

“We’re not going to run out of scholarships,” the coach added. “It’s just a question of when they’re coming in.”

Huffman, of 247Sports, expects the NCAA’s February signing date to be pushed to a later date in the spring. Otherwise, he believes the class of 2021 could have the potential of being a “forgotten” recruiting class. A number of states begin their high school football seasons after February’s signing date. Washington is one of them; practices begin Feb. 17, 2021.

Owens, the Skyview senior, takes the advice that Barnum is giving to high school athletes: control what you can control. He knows recruitment will come.

“I decided it’s a chance to get better,” Owens said, “to better myself, better my teammates, and better our future. … Three months isn’t enough, but six months is enough.

“For all you fellow seniors — don’t lose hope.”